Justin Coleman has committed to Alabama.  He is a 5'10 155 lb PG from Wenonah High School here in Birmingham, and is a top 100 rated player nationally.  He is a good kid from a good family, I know his grandmother fairly well, but most importantly a very good point guard.  He is quick, makes good decisions, and can handle the rock.

This is a great pick up, Congratulations to Coach Anthony Grant and the staff.  This is a good year for in-state talent (something we haven't been able to say around here in a while) and it is rumored that Coleman, Riley Norris, and William Lee would all like to play together.  Maybe this is a good sign that more positive news is to come?

Part 2 of a 4 part 'series' of posts. All of the photos are from the seats I was sitting in.

20) Rangers Ballpark at Arlington (Arlington)- I truly believe the Braves modeled their park after this one. I can't tell the difference between the 2. Anyways, it's in the middle of nowhere (Cowboys Stadium is now nearby) and bland as all getout. Mediocre food, seats seem far away from the field, and parking kinda sucks. 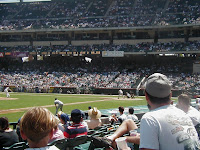 19) Angels Field of Anaheim (Anaheim/LA)- Admittedly, this one is kinda vague to me as I went over 10yrs ago to see the Yankees play. Neighborhood was 'eh' and the park itself wasn't anything special to me. It was a side trip on the way back from Vegas. 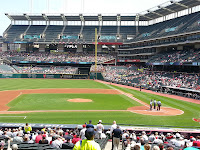 18) Progressive Field (Cleveland)- Despite Drew Carey's claim, Cleveland does not rock. The ballpark is very nice inside, but the atmosphere around the place has a lot to be desired. Food was 'meh', but their souvenir cup is sweet (Note- I started collecting cups back in 08).

17) Citi Field (Flushing, NY)- an overprice venue that IMO isn't much better than the orange toilet bowl it replaced called Shea Stadium. Crappy food, overpriced seats, but the park itself is very nice. Not $800 million nice, but nice.

16) Great American Ballpark (Cincinnati)- I like the location (close to downtown), but then you realize it's Cincy and you say... dang, this is downtown Cincy? Interior of the park is nice and it lived up to its rep as a HR friendly place the night I was there

15) Miller Park (Milwaukee)- originally I had this place higher, but as I visited the final 10 parks they kept being pushed back. Retractable roof is nice, stadium itself looks great, and the food was decent, but I didn't see anything around the park to do. Mind you, I flew in there about 30 minutes before the game, drove straight there, and left in the 6th to head south to...

14) Wrigley Field (Chicago)- awesome neighborhood surrounding, interior of the park left me let down. Probably didn't help that I drove 2hrs to it, sat in possibly the coldest May game I can remember (bought a $75 Cubs sweater right before the game) and ran for the train in the 6th when I couldn't shiver anymore. Regardless, It made the top 1/2 so considering all the new parks I think that's pretty good.

13) US Cellular Field (Chicago)- I had VERY low expectations of this place. I was told it was a bad part of town (that seems to be true), but upon walking to it I was impressed with the structure. Parking was $10 and it was about a 10 minute walk which is fine in daylight hours. About the park... great seating, good brat, and was 'surprised' that I could spend $30 for a decent ticket, food, drink, and parking. I fully expect DJC to rip me for this (heh).

12) Yankee Stadium (Bronx, NY)- Yes, I'm a Yankee fan. No, I don't think this billion $ place should've been built in the 1st place. It's a big corporate field to me... all of the history of Yankee baseball IMO is across the street still. Seating is much better though... even though I felt further away from the field than I did in the old place. Food is excellent though.. and I suggest going to lower level LF and get a steak sandwich. I think it was $15, but it was well worth it. Lik Citi Field, it's nice, but not a billion dollars nice.

11) Nationals Park (Washington, D.C)- great sight lines, easy to get to, but decent priced parking was a good walk away. Inside, the food was great and didn't break the bank... and I found a MLB.com discount for this seat. I think it was $15... and it was the day after (or day after that) Strasburg debuted.
Posted by bobbyjack at 9:06 PM 3 comments:

As the millions of readers to this site know, I'm a big MLB fan so I wanted to hit every current ballpark in the county. I just recently accomplished this with a trip to US Cellular Field in Chicago. Anyways, I'll update this later with photos from each place.

30) O.com (Oakland)- the only saving grace about this place is it's easily accessible via BART. Run to the park, run back to the train, keep head below windows.

29) Tropicana Field (Tampa)- while I understand it rains a lot in FL, it rarely rains more than an hr. Add to the fact the park is in St Pete (nice little traffic jam drive from Tampa) and you understand why people don't go to games. And the park itself is AUful. 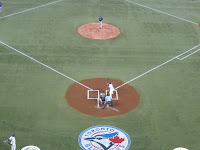 28) Rogers Centre (Toronto)- 25yrs ago this was a great place. Now, it's outdated and even the locals don't know if the Blue Jays are playing.

27) Marlins Park (Miami)- brand new (a yr old) and it sucks. Built in a neighborhood with nothing around it, bland, and most importantly... noone goes to games. The people of Miami were hoodwinked by their local gov't in financing this.

26) Minute Maid Park (Houston)- The one game I attended they kept the roof closed even though it was about 85 degrees outside. Park isn't in a great area and don't have much around it from what I remember. And the train... it screams Auburn to me.

25) Dodger Stadium (LA)- old, parking is a nightmare, and seating sucks. And nothing around it.

24) Chase Field (Phoenix)- only game I attended there the outside temp was 104. Thankfully the roof was closed. Nothing special about this place, but it is easy to get to via light rail.

23) Kauffman Stadium (Kansas City)- I admit I was there the year before the remodeled the place, but left unimpressed. It's in a sketchy part of town with nothing around it. 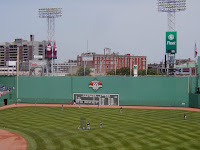 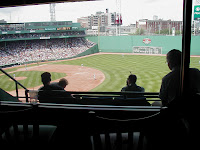 22) Fenway Park (Boston)- the neighborhood is great, but everything else about it sucks IMO. Seating is tight, food is mediocre, and there's a beam blocking part of the field (EVERYWHERE) in the lower sections. I suspect people will rail on me for this one. Edit- I sat in the 'luxury' box for this one... I thought it was crap.

21) Turner Field (Atlanta)- if you were to look up the word 'bland' in the dictionary a picture of this place should be there. Traffic nightmare, no easy mass transit to it, bland park, bland food, bland everything.
Posted by bobbyjack at 9:54 AM 4 comments: