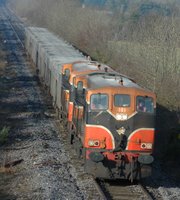 ... about freakin' time I say. Note- we played without Ronald Steele and Jermareo Davidson.

Steele missed the game with tendinitis in his right knee and a sprained left ankle after trying to go in warmups. Coach Mark Gottfried announced before the game that Davidson, a senior center, had withdrawn from the fall semester after missing some classes following the death of his girlfriend in a November car accident. His brother is in the hospital with an unrelated injury.

Davidson is expected to be eligible for next Saturday's game against Southern Mississippi once final exams are over.

"With the SEC and the NCAA, there's a process where you can withdraw and have your semester wiped out and not get penalized when there's a death or tragedy," Gottfried said. "We're just trying our best to make sure we look out for him."

The good:
Everyone got to play. I think some members of Mark's Madness got some PT in the last few minutes. (g)
Gee was the only one to log more than 30 minutes. Oh yeah, Steele got rest.
68% from the field is ok... won't lose many doing that.
Hendrix- he picked up the slack big time (34 points/10 boards).
Hollinger and Torrence... zero TOs toggling at the point.

The bad:
Too many turnovers (I have to bitch about something).

Overall, this is what the doctor ordered after a tough loss in South Bend.
Posted by bobbyjack at 11:14 PM

I can't get upset about this. I just hope he's okay.