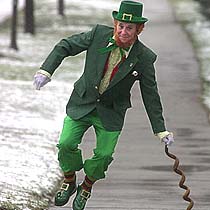 Obviously, this our first true road test. Should be a back and forth game.
Notre Dame stats pack

Their lone loss to Butler doesn't look so bad right now. The good news is they struggled to be Lehigh at home, but that could've been an off-game for them.

Mike Brey has done a solid job in South Bend... and he did a great job at Delaware before this gig. They are well coached and play solid fundamental ball. We need to bring at least our B+ game to escape with a win.

As for individual talent... we'll need to contain Rob Kurz (I assume Hendrix gets the task of covering him) inside and cover Colin Falls and Russell Carter from the perimeter. They don't have a player taller than 6'9" on the roster so we should be able to punish them inside, but they do play 9 so they'll have fouls to give (read- we must hit FTs).

Prediction- Alabama wins by 4 in South Bend behind a monster game by Davidson (something like 20 points, 12 boards and 5 blocks).
Posted by bobbyjack at 6:56 AM

Thanks. Hopefully we won't have another coaching search in 2012, but our recent history tells me we probably will.