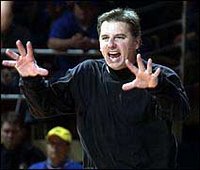 All you ever wanted to know statistically about the undefeated Golden Eagles from Hattiesburg.
USM stats pack

A couple of things about them you might not know:
1) They've played a cupcake schedule. They haven't been tested. Even Dukie V commented on this.
2) Larry Eustachy is their HC. You know him from Iowa State as the guy that lost as a 2 seed in the 1st round to Hampton. You also know him from his post game parties at rival school's fraternities and student apartments. I think he's turned his life around so good luck to him after this game.

Not a whole lot you can pull from their stats being the weak schedule they've played.

I have not seen them play (and unless you're an avid USM fan you probably haven't either)... all I could guess is Wise is their best player and biggest threat beyond the arc (which we still have problems defending under CMG). Hendrix should have his way inside as I don't think Dotson can cover him. FEED THE BALL INSIDE TO JD AND RH!!!

The frat parties happened at Mizzou. Don't you remember that stop one night in Columbia? I can't blame the guy for hanging out in that town after the talent we saw in our brief stay!
Their schedule is really really bad. If Steele plays we win by 20+. Otherwise you're prediction is about right.

Ah yes... Columbia, MO definitely does the "Show Me State" proud. I suspect we struggle with them although we really shouldn't.

Courtney Beasley from Butler here in Hville is a very decent player. Head to head, he single handedly took Butler to the 5a title over Mr. Hendrix and Athens. He is a 2g that can create his own shot and has decent inside moves.

How'd he end up at USM? Did UAB and Auburn not offer him?

prep school due to grades. His best offer out of high school was Jax State...