Arkansas stats pack and other stuff 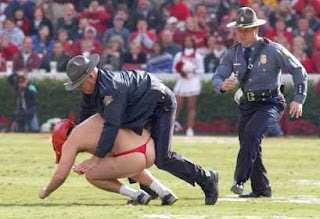 They lost to the 2 time defending NIT champs (South Carolina) Wednesday on the road. They are perfect on the road this year (0-5)... let's hope that continues. The difference between them and us on the road is they've been competitive while we've stunk up the gym in 4 of our 5 road games.

Mango Salsa (AKA- Steven Hill) has been playing well lately. He's actually scoring and still playing pretty good defense. Maybe this is because Heath decided he's good enough to play. That one has always puzzled me and my wife (a big time Razorback fan).

Weems, Thomas, and Beverley lead the team in scoring (only ones in double digits), Townes seems to be in the doghouse as his minutes have been cut, and Ervin has been playing much better as well although he still takes too many ill-advised shots. Arkansas normally goes 7 deep.

Normally I say pound the ball inside, but the way we've been lately (Auburn beat us down inside) and the fact that the Hogs are bigger tells me we really need Gee, Riley, Steele, and Hollinger (and Tubbs if he sees the court) to hit from outside. JD and RH should spend most of the day setting screens for Riley and Steele.

Prediction- Alabama by 7. This is another must win game.

Other links:
-Bracketology is out... we're a 10 now. LSU is in the Not Invited Tournament.
-Jerry Palm had us at 8 on 1/19. I figure a new one will out later today (putting us at 10).
-The great Verice Cloyd has transferred. Another one bites the dust.
-Thanks to Todd from rollbamaroll.com as he found this before me... Alabama is slated to play in the Maui Invitational next year. Did someone say road trip? I love vacations with an excuse to see us play.
Posted by bobbyjack at 7:52 AM