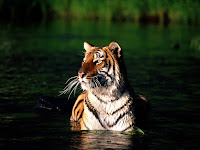 ... unlike us, they come in with confidence after beating down UConn on Saturday.
Bengal Tigers stats pack

I think most of you know that LSU played a pretty brutal non conference schedule (at Washington and Texas, at home to UConn and Texas A&M... all probably seeded higher than 7 in the NCAA tournament). The loss at home to Wichita State wasn't looking so bad until recently... as the Shockers have dropped 4 of their last 5. Regardless, LSU is a very talented and road tested squad.

Other notes:
- Glen Davis (I refuse to use his nickname) was in a car wreck. He's a bit sore, but alright. Maybe Hendrix can exploit that soreness by bodying up on him.
- Terry Martin is a transfer from Texas Tech. I guess he didn't like playing for Bobby Knight. He's a tall guard that could give us trouble.
- Mitchell and Temple are the other guys to watch besides Davis. Read... let Tack Minor shoot 'til his arms are sore :)

Prediction:
I have a feeling CMG ripped the team a new one behind closed doors and we'll come out strong. If Davis is still sore and we contain Mitchell I believe we win by 15. I think we force the guards to beat us and they won't... Alabama by 15 led by Riley and Hendrix.

I haven't posted anything since the game Saturday, if it can be considered a game. I have refrained from this, because I want to see how Bama responds. If it is like last year after the Ole Miss game then we will be okay. If not, then we have not seen the worst yet. I think we can respond, but we will see.

It is just so frustrating to see us build momentum at a time when the football team is in the tank. Then, when we hire Saban, we finally get the focus back on us and crap the bed.

At the same time, I wanted to refrain from saying much since watching the game made me physically ill and I had to quit watching. I had just bought a Sharp Aquos 42" LCD TV, and I didn't want to throw anything into it.

Here's to us rebounding at home and taking one against the real Tigers. RTR!

Never break in a new TV with a road game... especially with our track record. :)

Thankfully, I turned it off with 10 minutes to go and spent the rest of the day saying "hit" or "double-down."

I prefer FullTiltPoker.net over blackjack, and I played poker online during the second half...