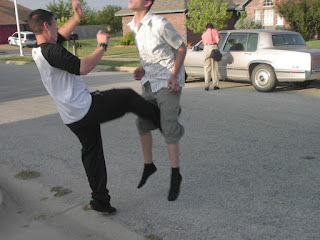 A good effort for most of the game, but again we wilt away in the end to the mighty Gators.
Box Score

I know many are going to say we played well and the better team won... blah blah blah, but I'm going to take a different route. We should've won this game. Really, we should have won this game. The first half was everything I've been waiting to see from this team all year. Everything clicked and Florida was waaaay off their game in the first half. Hendrix got started early and Gee was dribble penetrating like I haven't seen from him since the trip to St Thomas.

The second half... well... not so good. Florida picked up the full court pressure which led to turnovers and ill-advised shots. I credit the Gators with some of that as they are the #1 team in the country, but still... some of the shots taken in the 2nd half were things I'd try in the schoolyard. Despite the defensive intensity by Florida in the 2nd half, they still never got in rhythm on offense. Honestly, I think that was the worst I've seen the Gators play since their loss to FSU earlier in the year. Humphrey was off... missing open 3s and Noah for the most part was contained.

Oh yeah... I normally don't have issues with officiating, but yesterday I thought the refs were pro-Gators. We were getting mugged inside while Florida seemed to get some of the tick tack fouls called in their favor. Noah must've went over the back at least 3 times without being called for it.

The good:
- Hendrix down low (again). This guy is the team MVP.
- Defensive presence... at least for the first 32 minutes.
- Gee taking it to the hole.

The bad:
- Disappearing O. We went scoreless for almost 4 minutes at the end of the game.
- Rebounding- Florida cleaned the boards.
- Not taking care of the ball. 7 steals... ugh.

I don't mean to "poo-poo" on the game, but moral victories doesn't impress the NCAA committee. Texas Tech won at A&M, Va Tech won at UNC, and Louisville won at Pittsburgh this week. We had the chance to do the same and let it slip away. Like I said earlier, we got the Gators on their off-night... we should've taken advantage.
Posted by bobbyjack at 7:26 AM

I completely agree, this was our best chance to beat the Gators and we lost it down the stretch again. I knew it was over after something like 4 straight possessions where UF lead by 1 and neither team could score. We could have retaken the lead so many times and go either ugly shots or worse, another turnover.

As with Ole Miss it was our guard play in the 2nd half the cost us the game, although Gee was playing out of control. I can't blame CMG for this one but he didn't to make some adjustments when UF started guarding us far out. Last year we went more up tempo and spread the court and I feel like we need to do this again when teams play that much pressure D.

I also agree about the officiating...I thought it was the worst I've seen this year.

Well, UK is the season for us. I just don't see how we can loose that game and make the NCAA.