Rebels stats pack and other thoughts 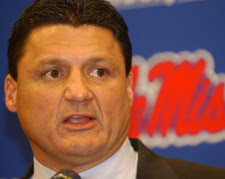 Before I start... I didn't comment on the M$U game since I couldn't coherently hear it. Internet radio was choppy at best. Listening to it was like me translating spanish to english. I can pick up every 3rd word.

Andy Kennedy has done a good job with them. To be honest I thought they'd go in the toilet for a few years after firing Barnes, but Kennedy has them playing well. I don't know much about their players except Doyne and Sanders are their scorers.

Again, we should pound it inside as they play a 3 guard lineup. Hendrix has been a monster inside lately and Davidson should be able to post up and score at will... hopefully this happens.

Ole Miss is having a white out. The 527 fans in attendance should have the place rocking (g).

Prediction- It's a road game. I don't feel good about this one. Gametime is 4PM CST on FSN.

Thoughts about the SEC tournament and what it means:

Winning the tournament improves seeding in the NCAA tournament. If you're a bubble team, you probably want to win at least a game or 2 to impress. Heck, if you're sitting anywhere between a 5 and 10 before the SECT winning a couple of games can bump you up.
IMO, before we think about winning the NCAA we should at least win one SECT as a "marker" of success. How can anyone think about winning the NCAA tournament when we don't have a SECT title under our belts. The argument of "resting up" for the NCAA is somewhat valid, but from memory the conference tourney winners that flame out in the first round are usually teams on the bubble before winning the auomatic bid (Ex- Syracuse 2006).
Posted by bobbyjack at 8:40 PM