Are any of you Bob Dylan fans? 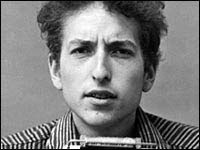 If so, you might be familiar with the often repeated, black-and-white news clip of a mid-sixties Bob Dylan interview. All the journalists have on dark suits, dark ties and hats. It's really a dated piece and it's time frame adds to the irony. In the shortened version, one reporter who obviously has no idea what is going on in the world around him asks Bob, "Approximately how many folk singers would you say are also protest singers?" Dylan's curt reply: "I'd say approximately a hundred and sixty four." (Please forgive me if I remember the numbers wrong.)

I'm just not sure that anyone really gives a darn about the basketball team. Unless the team is tanking no body really cares about it but the sports writers, and even they print little more than cold summaries of the games. In Mobile we usually have to get box scores from the Internet because the Mobile Mullet Wrap doesn't go to enough trouble to print them where they can be located.

Am I exaggerating? Yeah, maybe a little, but only for effect.

If Mark Gottfried had a half a brain, he could become Bear Bryant type icon in this state. He could create a Bama Basketball legacy and fashion the image any way he desired because he would be writing on a nearly blank sheet of paper.

Who are our Basketball gods? CM and Wimp? Name another. A few people might remember the Rocket Eight, but what were their names and who was the coach? Did CM or Wimp ever make it to the Final Four? No! As much as I enjoy winning tournaments and conference championships (remember those days?), the road to Basketball Valhalla runs through the Final Four.

If Gottfried had not laid that huge egg this year, he had his program on a track that might have made him a fixture in those hallowed halls for the next five or six years. He probably could have begun recruiting on a national basis like most of the biggest programs do. But he blew it.

Sadly for Gottfried, the road back to where we want to be has to go through the hearts and minds of the young men who learned this past season that he does not know what he is talking about. His entire approach to the game of college basketball is flawed. If he is going to succeed at the desired level, he not only will have to change his approach but he will have to convince these kids that he knows what he is doing.

Can he do it? I don't know. I sure hope he can. With an Elite Eight or even a Sweet Sixteen run this year CMG could have begun recruiting on a national basis. Now he will need two or three seasons to overcome the egg he laid this season.

I honestly hope the man looks deeply into himself and asks himself what his parts were in this train wreck of a season. If he can identify and fix those then he has demonstrated himself capable of fixing the rest. I am praying and pulling for the man, because a functioning Gottfried is an excellent thing for our program and for our players.

Only time will tell. Until then, we are stuck with the losers' cheer, "Wait 'till last year!"
Posted by Alias at 9:23 AM

Until the University markets basketball to the younger generation interest in the state is what it is.

When I started this blog a year ago (it's been a year already?) the goal was to inform and hopefully create more interest in the game in the state. Having a crap season doesn't help the cause.

We'll continue on... even as the athletic department and P.R. guys are asleep at the wheel (like Tony LaRussa).