SECCG and other college basketball thoughts 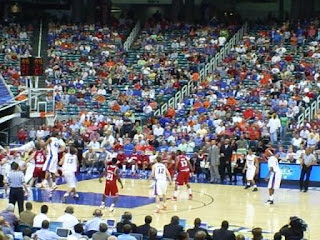 First, let me address the SECCG in the Ga Dome. I know why they play it there ($), but truth be told it shouldn't as it's one of the worst places to watch a basketball game. Some of the seating is fine, but the "feel" of it is well... off.

I had great seats to the game (see photo... thanks to a connected friend)... 11 rows up center court. There were plenty of empty seats though. On to the game... let me say that Noah gets away with murder inside. He hacks, grabs, and plays dirty. I hope payback's a bitch for him.

Florida didn't bring their A game, but Arkansas brought their C game and the 2nd half told the story. No one from the Hogs could hit from the outside.

Stan Heath is still a terrible coach. From what I understand there is a 900K buyout on the table if the Hogs don't impress in the tourney (assuming they make it).

College basketball musings:
- Georgetown dismantled a very talented Pitt squad last night. I think Hoya paranoia is back and I pick them to make the Final Four.

- UNLV wins the MWC tourney. While they are not the Runnin' Rebels that you remember Krueger has done a magnificent job restoring the program. I think he stays there a long, long time and UNLV finds themself back in the hunt for a NC in the near future. What kid wouldn't want to live in Vegas for 4 years?

- Kansas is looking tough. Regardless of what happens against Texas (down as I type), the Jayhawks are a 1 seed and will make it to the Elite 8. You know that Bill Self runs the high post offense? Not to the degree we do, but it's a part of his gameplan.

- North Carolina takes care of the Wolfpack. West Virginia and Illinois are celebrating in the streets.

- How do all these kids afford the artwork (tattoos)? I was good to pony up $50 for my one tattoo. Some of them have arms sleeved. I wonder if there's a team tattoo artist?

I know everyone is on pins and needles for the NIT bracket to be announced. That is at 8PM EST I believe.
Posted by bobbyjack at 3:58 PM

Wii're giving away a Wii! Or win a T-Shirt if you finish in the top 10.

Check that ish out.