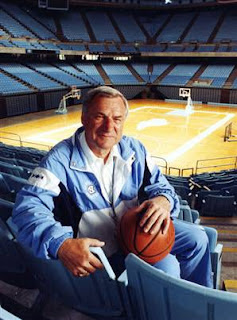 It looks like CMG is going to replace Asbury (who retired) with Kobie Baker. I know nothing about him to tell you the truth and being honest I doubt he'll have an impact on the team.
Here's his resume from rolltide.com.
I'll say it's underwhelming, but let's be honest... did anyone think we were going to get some "big name" assistant. I didn't. Saying that, I doubt we'll see any changes this coming season which is not a good thing.

Bamamag has a good writeup on Wimp Sanderson and his emphasis on the SEC Tournament.
I wish CMG would adopt this strategy... conference tournament games prepare the team for the big dance.
The writeup goes into more than just the SECT... just read the article.

Mississippi State (Alias spells it M$U) has parted ways with 3 players from their SEC West winner and NIT runner up squad. At first I thought this would hurt the Bulldogs, but looking at their roster it seemed to be a case of not enough basketballs. The Delks were probably going to be squeezed out of PT next year.

So far, only 5 SEC players have declared for the draft... 4 from the mighty Gators (you know their names) and LSU's Glen Davis (who I predict to be a major flop). As usual I expect a couple of mis-informed kids from this conference to declare as it happens just about every year.

LSU's Ben Voogd is transfering back west (probably somewhere in Oregon). I guess he's homesick... and probably sees that LSU is going to suck next year.

How did Auburn get Dean Smith and Roy Williams to visit their campus? A coaching clinic is scheduled for May 4th and 5th. Jeff Lebo does have some pull.
Posted by bobbyjack at 1:17 PM

Hey, have you been to this site?

Since you are a Jeter fan, I couldn't resist....

Good stuff... I just sent my Red Sox friend a Jeter message. I should get hell for that later.

Here's a link to last weeks interview with Coach Gottfried in the local Mobile Mullet Wrap:

Work has kept me too busy to think about basketball lately (thank heavens!) but I took some comfort from a couple of quotes from that story:


-- Q: Do you think you have the makings of a more physical team?
Advertisement

A: I don't know the answer to that question just yet. We'll see. What we're going to do, we've already begun, our individual workouts and team workouts on the court are a lot more intense than they've ever been. There's a lot more expected, a lot more demanded out of our players. Our approach in the weight room has been turned up to another level. We've got this trip coming up in late August, Labor Day weekend, that we're going to travel to Canada and play four games. We get 10 practices there, so that's going to be real beneficial to our team, as well.

-- Q: I asked about being physical because when you look at how Demetrius Jemison plays and you see (Yamene) Coleman has a big frame, they look physical.

A: We can be, but that's yet to be determined. We've got to get there.


I take that as a positive sign that Coach Gottfried understands that he needs to address some fundamental flaws with his approach that have created recurring problems on his teams. Recruiting does not need to be the only solution to those problems. Teaching, training and discipline do.

I'm hoping he has learned his lesson and will start us moving back in the right direction again next season. They still need to be taught, but we are only a few mental adjustments away from being a very competitive program again.

Finally, there is only one way to spell M$U, and the vehement nature of their thug fans protest of that term only further evidences to me the common knowledge of that program's duplicity!

I don't think much will change next year... excpet we should sneak into the NCAA.