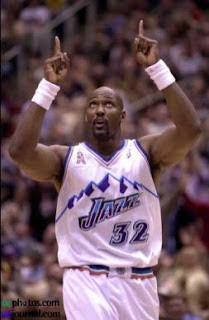 I can't say I'm surprised. He's done all he can in the college game. The rumored 6 years/$6 million per sounds like a waste of money to me for a college coach as history hasn't been kind to them in the NBA, but hey... it's not my money. I guess that's whay he said no to Kentucky.

Also, the great Karl Malone is now the director of promotion and strength and conditioning coach at La Tech. Man we could use him in Tuscaloosa. I was never a fan of his, but respected his game. Could you imagine Malone teaching Hendrix how to properly throw a stray elbow or how to effectively block out? :)
Posted by bobbyjack at 3:12 PM

The only problem with Malone coaching Hendrix is the fact that Richard might actually start wearing a cowboy hat every other day.

heh... Hendrix could raid Stockton's wardrobe and wear ball huggers and Malone's cowboy hat if it makes him a more physical player.