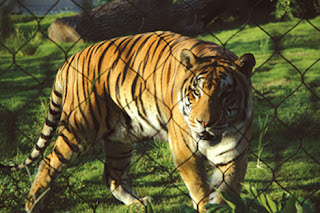 - John Pelphery says that his Arkansas players are out of shape. If him and his staff get them into shape I say they're the preseason favorite to win the SEC.

- Gators and Billy Donovan close to contract extension... maybe. Rumors of him flirting with the Orlando Magic job are out there. Interesting. IMO he'd be a fool to leave the college game, but then again he's pretty much accomplished all you can in college basketball.

- Patrick Patterson picks Kentucky. I guess Gillispie is already doing better than Tubby Smith has on the recruiting side. I'm passing this along as I know nothing about him... or follow recruiting.

- South Carolina boots Mike Jones. No official reason why, but chances are it's academics. Dave Odom is getting tough on his players and now has the team refocused on winning the NIT again.

- LSU's mascot (the animal not the human) dies. The tiger was 17. I wonder how many tigers are left in the world. Nevermind.. I got my answer... I think. That's a shame.
Posted by bobbyjack at 9:01 AM