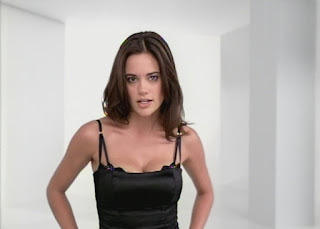 Differing opinions on who is #9 in the SEC.

Hville
- Jeff Lebo (API)- even after API blows ~$100 million on an arena, they will never support him.

Alias
- Andy Kennedy (Ole Manning)- He still is a bigger unknown that Felton, that's why he's rated ahead of Felton.

Bamahoops
- Dave Odom ('Cocks)- I give him credit for consistency... always trying to be the 66th best team in the country. That's what "mid-majors" shoot for and I'm sure South Carolina strives for more.

I'm not sure what RGX bodyspray is, but their spokesperson makes me want to buy stock in their company. Let's be honest, you'd rather stare at this than an "action" pic of the great Jeff Lebo... right?
Posted by bobbyjack at 4:47 PM

I'm glad my buddy Hville has learned how to spell "API"! Now if I could just remember that Bamahoops first name is not Matt, perhaps I'll survive here for another season.

I actually think Jeff Lebo is a good coach. I have no idea whether he is a good recruiter or floor general. Only time will tell that. But every time I have watched his teams I have seen evidence of good coaching.

Every person on the court plays with discipline and appears to stay within the confines of the system Lebo has put into place. He insists that everyone play defense the length of the court. No matter what the score is or how much time is left on the clock, Lebo is always coaching. If player breaks Lebo's discipline at any time he either is benched or is chewed out on the sideline during a break in the action. One or the other takes place immediately.

I believe Lebo will be a force in the SEC if he ever can get the talent at API he needs to run his system. I had hoped the Aubfidels (credit to Token for the word he invented) would run him off before giving him enough time to make things work his way. CMG might have eliminated that opportunity by losing to Lebo's team twice last year; and one of those a bigger blowout than Jason Reese's senior year finale.

Now that I think about it, I still am so disgusted by the way we played against API last year that I might have to delete my video of the Reeese dunk.

Yeah, I know he is a decent on-the-floor coach, but I tried to look at the big picture. He is in a place that will never support him, and will never out-recruit Bama and probably UAB within the state unless bad times befall both UAB and Alabama. Think about it. Cliff Ellis' success peaked at the time we were at our lowest: Hobbs' last two years and Gottfried's first two years.

Perhaps that's why all of us had Felton in dead last. He may turn out to be what UGA needs, but in the big picture, it hasn't shown yet, and they probably couldn't have done better with what the Harricks did to them.

I thought we were evaluating the coaches, not the programs or the schools.

As I've admitted, all I really know about any of these other teams and coaches is what I see when they play Alabama because I do not have time to be a true college basketball fan any more. (Unless I want to move in with one of my divorced buddies and keep paying for my wife's house like they are doing.) :-)

Lebo admittedly is operating at a program that has been deemed irrelevant by certain members of the sports media. Their entire school and program are so irrelevant to anyone other that UA, UGA and UF fans, that their best football team ever went 13-0 and was locked out of the BSC Championship game. They are so irrelevant that, in spite of being the most penalized program in the history of the NCAA, they are not even investigated when they commit repeated, flagrant violations of NCAA rules that are admitted by their present and former representatives.

Add to that the fact that Lebo is a basketball coach at a swimming and diving school and IMO even winning six SEC games is evidence that he is a good coach.

Excuse me, please. I think I need to go and take a shower now after having thought about API for so long a period of time.

Alias... if you give the wife Thursday, Friday, and Sundays she should be happy. That gives you the other 4 days to watch college ball. That's what I do :)

I really think Lebo is hoping for just one breakout year so he can parlay that into a job at a place that actually gives half a crap about basketball. If talent is equal, I'd take Lebo over half the coaches in the SEC.

Excuse me while I wash the stench off for that previous statement.

Bamahoops, I don't disagree with anything you said, especially about Lebo. Unfortunately, Mrs. Alias doesn't care about your opinion or mine. Neither do the two Alias daughters. The older daughter will be living less than a block from Bryant Denny next year so I guess I have to keep paying her bills and find some tickets.