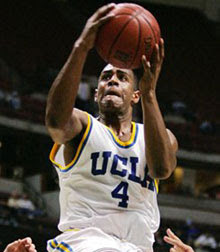 Every year a bunch of kids get duped into thinking they're 1st round material. Others declare because school is just not for them (which I understand as college isn't for everyone). Anyways, the list is here.

Quick thoughts on some of those that stayed in the draft:

1) Aaron Afflalo (UCLA)- He could use another year at UCLA. I suspect he'll be the 2nd coming of Charles O'Bannon in the NBA. That's not a good thing.

2) Mike Conley (tOSU)- He's a lottery pick so he'd be stupid to stay. Saying that, I don't think he's all that good.

3) Daequan Cook (tOSU)- Projected in the mid 1st round so I don't blame him. IMO he has more promise at the next level than Conley.

4) Javaris Crittenden (Ga Tech)- In a league that drafts on potential instead of a body of work, he's virtually a 1st round lock. More than likely he won't have to leave the city as the Hawks need a PG in the worst way and could grab him with the 11th pick. He was up and down at Tech.

5) Jameson Curry (Oklahoma St)- He might be the only one (and his agent) that thinks he's ready for the NBA. No one else seems to think so.

6) Glen Davis (LSU)- He's the next Brandon Bass... and probably a 2nd round pick like his predecesor. He really should've come back.

7) Taurean Green (Florida)- The only Gator that should've gone back to Gainesville. Then again, he might've peaked.

Jermareo Davidson looks to be an early 2nd round choice (#36 according to some draft sites). Hopefully someone takes him in the 1st round so he gets that guaranteed 3 year check. Good luck to him.
Posted by bobbyjack at 11:55 AM

You are assuming that even though the Hawks need a point guard, that they would draft one. The fact they failed to draft Chris Paul, but instead took Marvin Williams is unfathomable to this day....

The Hawks have 2 chances to draft a PG this year... at #3 with Conley or #11 with Law or Crittenden. Funny thing... even when the Hawks get lucky (getting a top 3 pick) they don't.