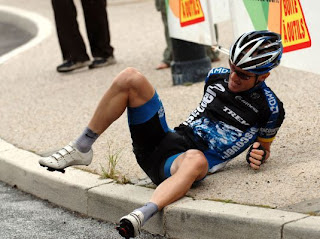 Levi Leipheimer, winner of last year's Dauhpine and one of the favorites to contend for the Tour de France both this year and last, evidently saw a chance to grab a stage victory for his team and with fewer than 10 km to go so he sped off in a one-man break away. He was chased by two-stage winner and former race leader Alexander Vinokourouv ("Vino"). Vino rides for Team Astana. Astana has been riding aggressively and very successfully in almost every race this spring and they already had won three of the previous stages in the Dauphine. Vino probably would have caught Levi before the end of the race, but it still was good to see someone on the Disco team take a chance.

Unfortunately, Levi lost his bike on a rain slicked roundabout and Vino sped to the finish line 37 seconds ahead of the chasing group he and Levi had left behind just a few kilometers before. Levi evidently was not badly injured. He climbed back onto his bike and caught up to the chasing group to finish with them 37 seconds behind Vino. Unfortunately, that 37 seconds was enough for Team Astana to edge Disco out of the Overall Team Classification trophy.

Congratulations to Levi for having the guts to fail while endeavoring to accomplish something great. Here's hoping Team Discovery has learned that, at least during this racing season, fortune favors the bold and that they will adopt at least some aggressive tactics that will give at least one of their riders a chance to shine, if not win, in the Tour de France.
Posted by Alias at 3:03 PM