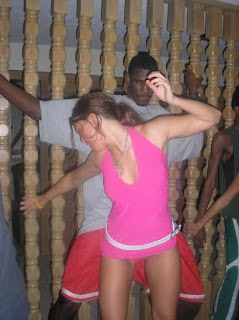 I found this Oden pic from a worldpress blog. There's also a breakdown of draft picks by schools from 1947 to today. Here's the direct link and here's the blog homepage. Good stuff...

From yahoo.com:
Round 1
Round 2

It's early, but I think my hometown Atlanta Hawks finally got this draft thing right. They got 2 players ready to contribute right now in Horford and Law. Heck, they might be the 2nd and 3rd best players on the team RIGHT NOW.

- As Hville pointed out in comments, JD was traded to Charlotte. It's a lot closer to Atlanta, but Golden State was the place where Latrell Sprewell made a name for himself (on the court). I'd be lying if I told you I knew much about the Bobcats outside of Wallace and Sean May, so someone smarter than me (or at least more educated on the NBA Bobcats) can add whether or not they think JD makes the team.

Overall the SEC had 8 drafted. The 2nd round picks in order were Glen Davis (35) by Seattle (traded to Boston), Jermareo Davidson (36) by Golden State (traded to Charlotte), Chris Richard (41) by Minnesota, Derrick Byars (42) by Portland (traded to Filthadelphia), and Taureen Green (52) by Portland.

Josh McRoberts dropped to the 2nd round? I thought he was (according to the gurus) a mid to late 1st rounder. Can I use "FINAL TRAGIC BLUNDER" in this case?

I noticed that Stephane Lasme (UMass) was drafted by Golden State with the 46th pick. You know him from that dominating performance against us in the Not Invited Tournament first round game. It's probably a good thing JD was traded to Charlotte as Lasme would've been tough to beat out for a roster spot.

That's all I got... feel free to add comments as I readily admit I don't follow the NBA anymore (except for the highlights on Sportscenter... at times).
Posted by bobbyjack at 7:40 AM

Well Jermareo got traded to Charlotte with Jason Richardson so he'll be a teammate with Wallace. But wait, Wallace and Richardson are the same type of player. That tells me the Bobcats must not think they can re-sign Wallace....

I thought that was the case, but the article on yahoo wasn't clear on that. I actually edited the post as I wasn't sure which info to believe.

The Bobcats are going to tell Wallace to go get paid somewhere else.