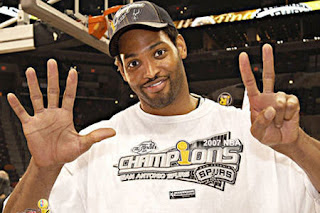 Gerald Wallace is making the move to become an unrestricted free agent in an effort to land a contract along the lines of 6 years and $10+ million per year.

His agent is Rob Pelinka. Sound Familiar? He was the token white shooting guard on Michigan's Fab Five teams of the early 90's. It also sounded from the article that Wallace and the Bobcats management would like to get a deal done, especially since the Bobcats are way under the cap.

Also, Robert Horry, who turns 37 in August, has already told the Spurs front office he wants to put off his retirement plans to return for one more season. Maybe Ring #8 is in his future after all. This should shake out within the next month or so...

I don't remember if anyone has said anything on this blog yet, but a belated congratulations to Big Shot Bob on Ring #7. Hopefully another season will seal his legacy and get him into the NBA HOF.....

Also, according to the New York Daily News, the Bucks are willing to re-sign Mo Williams at $7 to $8 million per year, but the point guard's looking for a starting number around $9 to $10 million. He made $1.92 Millon last season.
Posted by Hville at 1:33 PM

"Last great tragic mistake"? Congratulations, Mo. And thank you for comming back to Tuscaloosa to attend games when you can.

It would be nice if Horry could return to Coleman Coliseum some day. Having seen the receptions for players like Douglas and King who have been out of the limelight for years, I can hardly imagine the reception Robert would get.

1) This season the SA Spurs would not have won a NBA Title without him. The foul on Nash that caused a fight changed the series. Otherwise the Spurs would've been watching from home. It's like when Gimel Martinez took Horry out of the SECCG in 1992 (I believe) with a double ejection. Pure genius in both cases.

3) Wallace... didn't think he'd make it either. Kudos to him for never giving up and congrats on becoming filthy rich.

4) a combo of 2 and 3- The 2 best players under CMG left their freshman and sophomore years. What could have been if both stayed until their junior season (maybe).