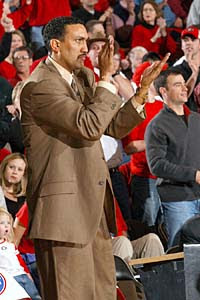 Thank you Billy Donovan for flip flopping... now I have to adjust the rankings. You'd think Eddie Munster would think of the consequences of flip flopping. Geez!

The crack "staff" here at bamahoops (g) have ranked the SEC basketball coaches from #10 to #1. Yes, there's 12 teams in the conference, but with 2 new HCs it's not fair to rank them so Gillespie and Pelphery get a pass. Actually, I ranked all of them, but Hville and Alias made a valid point so I changed my mind.

Dennis Felton
- Alias- I don't know what kind of coach he is but his players are thugs.
- Bamahoops- The mess has been cleaned at UGA and still they're not very good. I don't expect them to be any better next season (which would be year 5).
- Hville- For obvious reasons (he sucks).

Let me add that I really thought Felton would work at UGA... heck he still might, but as of right now I think he's been a major disappointment. He HAS to take the Bulldogs to the NCAA tournament or he'll probably be "fahred" at season's end. Maybe he's one of those coaches that excel in smaller conferences.
Posted by bobbyjack at 9:50 AM

My comment about Felton probably probably was my most insightful, you really should include my caveat if you intend to use my quotes. I believe I prefaced my comments with something like, "Here is my list, with few comments and even less thought." I really do not purport to know much about those other coaches and I seldom see their teams unless they are playing against Alabama. So it all was in fun.

I'm not backpdalling. I'm simply qualifying my evaluations. I don't still have a copy, but I think I had been hassling with that stupid wireless router for two days and spent maybe 5 minutes going over Matt's list. I don't think I'd change the order (not even recalling what I said), but I usually am more careful than that before I type something that might be posted in public. I'll leave it to Matt's discretion what to post. I doubt the M$U folks or the Aubfidels will bother to read here or to comment here during this portion of the off season. :-)

Sorry. Names and faces never have been my long suits.
:-)