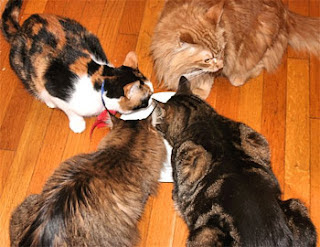 The Final Four... whoohoo. Again, we can't agree on anything.

Hville
- Rick Stansbury (M$U)- As much as I hate placing him here, he is a good in-game coach, and keeps State as a legitimate threat almost every year. Here's hoping to a death penalty in the near future.

Alias
-Bruce Pearl (Tennessee)- At least Pearl knew to play Chris Lofton. CMG did not even have enough sense to play M. Riley!

- UGA's Athletic Director Damon Evans comes up with an innovative way to make sure student athletes go to class. Unexcused absences get a $10 fine or game suspension. While I think it should be tweaked a little (say after 2 missed classes the fines begin) it's positively affected grades among UGA athletes. It's getting great press locally in the A.T.L.
Posted by bobbyjack at 8:18 AM