Auburn and it's $92 million investment in basketball 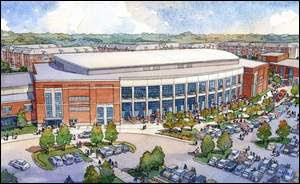 The new complex will have 9,600 seats, two practice courts, a weight room, premium and courtside seating and 12 suites with outdoor areas that will also open on football Saturdays. The university will accept construction bids next spring, and the arena is expected to be ready for the 2010-11 season.

An artist's rendition was unveiled Thursday, when the board's Property and Facilities Committee OK'ed it.

"This is a monumental day for Auburn University, the Auburn athletics department and the future of Auburn men's and women's basketball," athletic director Jay Jacobs said. "Construction of a new arena will help our basketball programs compete for championships, give our fans and students a venue that they can enjoy, and provide a facility in which Auburn University can take great pride."

The rest can be read here.

It seems like Auburn is trying to basketball seriously. Damn me for saying this, but this is a great move on their part. The next issue is getting talent to take a chance on Auburn and letting them know it's not in NY or GA. Anyways, Lebo should be thrilled (as he said above). I believe they one upped us. Saying that, I doubt Lebo will be there to christen the new arena if he has a good year before the 2010-2011 season.

Coleman Colesium should've been leveled instead of renovated. While it looks nicer than it did when I was in school, I don't think the investment was worth it. At least the top rows aren't as dark as they used to be.
Posted by bobbyjack at 2:45 PM

I'm with you though, Coleman did need replacing. I went to a game to see Maryland their first year in the Comcast Center. VERY NICE! All of the students had one end of the court and entered from the top. There were no portals anywhere else on that side. The seats were banked so steep that it looked like a wall of students bearing right down on the court. Intimidating if you ask me.

Who cares? They are API.

Excellent content - as you always provide and inspires me to come again and again. You are on my RSS reader now so I can read more from you down the road.
By the way, there is one more valuable resource I’d like to share with others readers. It’s called Secrets of Successful Traders that teaches you…
How to turn $1000 into $ 1MILLION in 5 years or less using nothing but...
• a brokerage account (so that you can trade),
• $1000 in a pocket
• And one 'jealously guarded' strategy that won't even require you to spend 20 minutes a day.
For more info & special discount, visit: http://www.2stocktrading.com/discount.html

Excellent content - as you always provide and inspires me to come again and again. You are on my RSS reader now so I can read more from you down the road.
By the way, there is one more valuable resource I’d like to share with others readers. It’s called Secrets of Successful Traders that teaches you…

• Recently, I reviewed a very unique stock trading company that has helped thousands of people to make money from the stock market- safely, easily and consistently...

and, for a small fee, they are willing to show you exactly how they did it.
For more info & special discount, visit: http://www.2stocktrading.com/discount.html

How can this happen so quickly and so dramatically when so many good things have occurred? Oil is down to $82 a barrel; interest rates are very low; the dollar is up; valuation levels are extremely attractive among many blue chip stocks.

What's the real problem? The problem that is killing the stock market is a lack of hope about the future.

Hope springs from optimism that is based on facts and history. Look at the history of America and really all of mankind. Life is full of setbacks and problems - that's just the deal. But this too shall pass, as all scary periods have.

Doomsayers have been around forever and their batting average is zero. Buying stock is based on hope - hope for the future. If one doesn't have hope, they shouldn't be in this business.

So what is the best service we, as professionals, can provide for our clients?

First, discuss the fact that we are dealing with serious problems but it is not at all like 1929. The Federal Reserve and the Treasury Department are doing many things to restore confidence in the financial system. There is global coordination in attacking the problem, which is lack of confidence.

Tell your clients to look at history of our great nation and what has happened since 1776 when we faced very serious problems. The stock market actually rose steadily about six months after Pearl Harbor and until the end of WWII even though the outcome was not at all clear for several years.

No one knows when the stock market will bottom and a new bull will commence. We do know that stocks and mutual funds offer the best values we have seen since Black Monday, Oct. 19, 1987.

Almost all Americans have hope about the future of our nation, but they need help to control their normal fears.

You all know my opinion - we have the characteristics of at least "a" bottom. Look at the scoreboard - Dow and S&P 500 down 18% last week, in only a week. If that doesn't show irrational dumping the only other environment that probably would is an official end of the world pronouncement from on high.

The VIX Index (69.96) soared to a record high; bears at extreme high levels, bulls no where to be found; valuation levels the best since Black Monday, October 19, 1987. And back then you could buy AAA long term munis yielding 10% or better vs. around 4.75% today.

No one can call bottom in advance with confidence, but we can correctly report that the conditions for at least a bounce are in place, assuming we are not headed for a 1929 depression.

We are not, but don't take my word on this. Last Tuesday, Oct. 7, Gary Becker the 1992 Nobel economic laureate, professor of economics at the University of Chicago stated in the Wall Street Journal - "we're not headed for a depression."

He states, "World economic growth will recover once we are over the present severe difficulty." Also he states, "Although it is the most severe financial crisis since the Great Depression of the 1930's it is a far smaller crisis, especially in terms of the effects on output and employment."

Stocks sold off sharply yesterday and the major averages have given back more than two thirds of the advance from last Friday's lows to Tuesday's highs.

The session got off to a bad start as investors began to react again to economic news: specifically, pre opening, the September retail sales and October Empire Manufacturing index were disappointing and stock futures sold off.

Pressure on the market came throughout the session on light volume in what we think was a classic buyers' strike after the significant volatility the past few sessions.

Many market participants were just content to stand aside and let the dust settle. Adding to the selling pressure was further second guessing of the government's rescue plan that we spoke of Tuesday carrying into yesterday's session.

The CBOE Volatility Index, the VIX, rose more than 14 points to 69.25, just shy of its record close reached last Friday at 70. The CBOE NASDAQ 100 indicator reached a new new record close at 72.93.

Based on the extreme fear and dramatic sell-off on big volume last Friday, we believe the market has probably seen its lows for this bear market but a full retest is underway. Today - Worldwide markets were down overnight and U.S. stock futures are signaling flat to lower opening. Today will be a big test for the market.

Here’s our market view on American stock market for 17th October, 2008
The major stock averages had another dramatic day of swings yesterday, the Dow reversing from down 380 in the morning to close up 401 points. The averages finished just shy of their highs of the session and the NASDAQ Composite led the way.
Stocks briefly rose at the opening, then reversed lower as a plunge in the October Philly Fed index (reported -37.5 v. estimated -10) and disappointing reading on September industrial production (reported -2.8% v. estimated -0.8%) weighed heavily. Follow-through selling from Wednesday was also a likely factor adding to the pressure on stocks.
The measures of fear again reached record levels in the morning plunge. The CBOE Volatility Index, the VIX, and the CBOE NASDAQ 100 volatility indicator both rose to new intraday all-time highs of 81.17 and 84.62, respectively. Stocks steadily slid to their late morning lows. At that point, the DJIA was down 380 and the NASDAQ 62 point and the internals of the market were overwhelmingly negative for both the NYSE and NASDAQ.
From the lows, the Dow rallied more than 500 points in an hour, gave back 200 points from their early afternoon peaks and settled into narrow ranges. A late acceleration sparked another 500-point rally up to the close. With the stock market successfully holding onto to their gains, the VIX and NASDAQ Volatility indexes eased back into their closes. The broad market finished solidly positive. Volume picked up substantially from the previous day's low levels.
Today - Volatility will also rise as a significant amount of options expire in a triple-witching session. The opening looks lower.
ThePowerStocks.com Team
Get 56 days free trial on our exclusive newsletter. Offer Limited.
http://www.thepowerstocks.com

Excellent content - as you always provide and inspires me to come again and again. You are on my RSS reader now so I can read more from you down the road.
By the way, there is one more valuable resource I'd like to share with others readers. It's called Secrets of Successful Traders that teaches you…
How to turn $1000 into $ 1MILLION in 5 years or less using nothing but...
" a brokerage account (so that you can trade),
" $1000 in a pocket
" And one 'jealously guarded' strategy that won't even require you to spend 20 minutes a day.
For more info & special discount, visit: http://www.2stocktrading.com/discount.html

Excellent content - as you always provide and inspires me to come again and again. You are on my RSS reader now so I can read more from you down the road.
By the way, there is one more valuable resource I’d like to share with others readers. It’s called Secrets of Successful Traders that teaches you…
How to turn $1000 into $ 1MILLION in 5 years or less using nothing but...
• a brokerage account (so that you can trade),
• $1000 in a pocket
• And one 'jealously guarded' strategy that won't even require you to spend 20 minutes a day.
For more info & special discount, visit: http://www.2stocktrading.com/discount.html