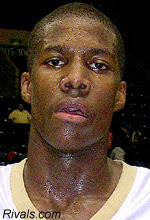 Tony Mitchell, a 6'6", 185 lbs small forward from Swainsboro, Georgia, committed to play for the Tide. On Rivals.com, he is listed as the #9 SF in the country in the 2008 class.

On the scheduling front, Coach Gottfried has added Texas A&M as a home-and-home series, with the Tide traveling to College Station this season. There is also a home-and-home deal with Clemson that begins this season when the Tigers play in Tuscaloosa. In addition, Alabama will host teams such as George Washington (Red Auerbach's alma mater), Southern Miss, and Belmont. Also, on Dec. 5, Alabama plays Georgetown at the Birmingham-Jefferson CC at 8:30 p.m. Alabama is also playing in a Las Vegas-based tournament (around Thanksgiving) that will feature Purdue and Iowa State. The Aggies and new coach Mark Turgeon bring a team that finished 27-7 (13-3 Big 12) and ninth in the final AP poll last season. Clemson began the season with 17 wins, but eventually settled for the NIT. George Washington, which just received news that star Maureece Rice is staying in school, was 23-9 with an NCAA Tournament appearance.

Lastly, just as a reminder, Alabama juniors Richard Hendrix and Alonzo Gee are among 30 players invited to USA Basketball's Pan American Games team trials that will be held July 12-14 in Philadelphia. Gottfried is an assistant coach for the USA team under Jay Wright of Villanova.
Posted by Hville at 11:15 AM

I had to google Swainsboro as I had no idea where it was (and I've been to just about every town in the state of GA). I have to assume the kid is going to be fed a lot of meat and potatoes when he gets here.

I did not know about GW being on the schedule... that's a nice addition.

When the dates are set for the Vegas Tourney I might have to make a trip out there. Like I need an excuse to visit Sin City.

I noticed that about his listed weight, too. Hopefully another year in high school will do him some good.