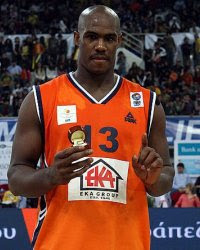 Mikhail Torrance and Demetrius Jemison were among eight collegians who flew halfway around the world to play exhibition games in China as part of a cultural exchange trip for Sports Reach, International. Bad news, though: they both lost weight on the trip. At a time when our guys should be bulking up and adding strength, Torrance and Jemison are shrinking. Do I hear Sam Haginas all over again?

Erwin Dudley, one of my all-time favorite players, has decided to return to play for Turk Telekom in Ankara, Turkey. Instead of a possible NBA tryout, Dudley takes the sure thing, which pays him more than $500,000 per season, which is obviously more than the NBA minimum. But at the same time, he is famous over there, which has to count for something. And since it is overseas, the money is tax free. Where can I get a job like that?

And lastly, we all knew about Chuck Davis' recovery from a knee injury, but apparently, he has also been fighting a blood disorder and is on blood thinners. Sadly, the Knciks were interested, but with his health problems, his chances of landing in the league are waning....
Posted by Hville at 2:08 PM

Dudley looks like he lost his baby fat along with his hair. :-)

Remember, he had it shaved as a freshman, along with Grizzard. It's hard to remember Grizzard with anything but cornrows.

Even if he has lost his baby fat, he definitely hasn't lost any strength, accoring to Hendrix's quote in the article: "He's a great player, and his strength is at another level," said Tide junior forward Richard Hendrix of Athens. "People tell me I'm country strong. But I guess his country is a little country-er than where I'm from."