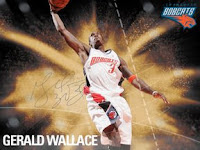 Gerald Wallace, the Charlotte Bobcats' top scorer from last season, has reportedly agreed to the Bobcats' offer of a six-year, $57 million contract. The sixth year of the deal will be Wallace's option and he can earn as much as $2 million each season in bonuses.

I knew he could hang around the league for a while. But getting with the Bobcats has turned out to be the right thing for him. I never thought he might get a deal like this....

Can you believe he is still just 24?

Mo Williams will be returning to the Milwaukee Bucks after agreeing in principle to a six-year, $52 million contract
Posted by Hville at 9:26 PM

If they somehow sign Mo and JD makes the team I might have to root for a NBA team again.