ESPN's Andy Katz- Vols should be class of the SEC 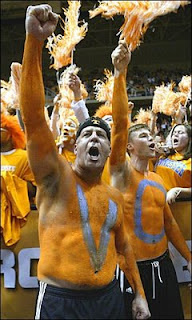 Tennessee coach Bruce Pearl wasn't hiding from the obvious at the adidas It Takes 5ive Classic on the Cincinnati campus Saturday. He said he will start the former Iowa forward this fall. And he will highlight Smith's ability to score inside and out, saying that Smith will flourish in his ball-screen offense, using him off pick-and-pop plays and allowing the Smith to play small forward and power forward.

Pearl said he will likely have three Smiths in the starting lineup -- Tyler and guards JaJuan and Ramar Smith (unrelated) -- to go along with SEC Player of the Year favorite Chris Lofton at guard and forward Wayne Chism. The starting five will be quick but on the smaller side with the 6-foot-7 Tyler Smith and the 6- 9 Chism as the only players taller than 6-2.

That lack of size shouldn't matter. This will be a classic Pearl team -- scrappy, wiry and all over the court.

Landing Smith is by far the least expected move in Pearl's tenure.

Link to the rest of the ESPN article is here.

Unfortunately I can't disagree with that. On paper they should the favorites in the conference. Assuming Pelphrey is a better coach than Heath, Arkansas should be the best in the West.
Posted by bobbyjack at 1:21 PM

I wonder why Tyler Smith left in the first place? Was it academics? Oh, nevermind.... :)

Was it because he didn't like Pearl? Did Pearl not like him? Playing time? I need to know the answer!!!