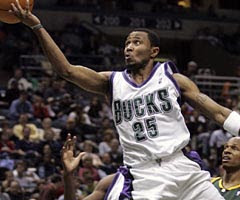 ... I think he's set for life now as Milwaukee signs the former Alabama great PG to a 6 year/$52 million contract. Congrats to him. He busted his ass as a 2nd round draft pick of the Jazz in 2003, moved on to the Bucks in 2004 and has been there ever since. I don't know much about the Bucks, but I think I'm accurate in saying they're a long way from being a contender in the east. Maybe they'll add some more pieces to challenge Detroit and Chicago (Cleveland was a fluke this season).

He proved a lot of people wrong (that includes me) by making it in the NBA. Still, if he came back his junior year he would've been a 1st rounder IMO.
Posted by bobbyjack at 6:26 PM

I thought about adding a new post for Mo, but instead added it to my Wallace post below. Didn't know if you noticed or not...

I did not see the link when I posted.

You only say that because I scooped you! (g)