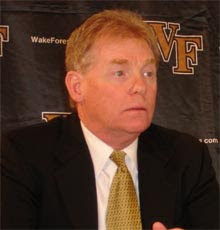 Prosser was rushed to Wake Forest University Baptist Medical Center.
Prosser, 56, was one of the most well-liked coaches in the industry and known for his witty and sarcastic sense of humor.

He grew up in Pittsburgh and went to high school at Carnegie before attending the United States Merchant Marine Academy.

Prosser has spent the past seven seasons at Wake Forest after spending one year at Loyola (Md.) and seven at Xavier. He has a career record of 291-146.

My thoughts go out to his family and friends. From what I understand he was a great human being.
Posted by bobbyjack at 4:00 PM