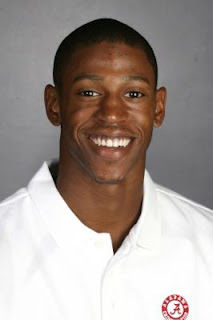 I had to post this since he is an engineering major.... :)

Justin Tubbs, a guard on the University of Alabama basketball team, is among the 499 freshman student-athletes the Southeastern Conference named Thursday to its 2007 SEC Freshman Academic Honor Roll. Making the honor roll required freshmen to have a cumulative GPA of 3.0 or above and be on scholarship or a letter winner. The list includes athletes from every sport. Tubbs, a Trussville native, is majoring in engineering at Alabama and was a member of the National Honor Society while at Hewitt-Trussville High School.

He played in 28 of Alabama’s 32 games this past season as a freshman, averaging 3.2 points and 9.6 minutes a game. He scored a UA first-year best 13 points in 11 minutes against Alabama State, shooting a perfect 5 of 5 from the field. Tubbs’ freshman highlights also included scoring 10 points at Mississippi State and 10 points against Southern Miss, and he had four steals in Alabama’s home game against Arkansas.
Posted by Hville at 5:55 PM

He seems to be another one in a long line of good kids in the CMG era.