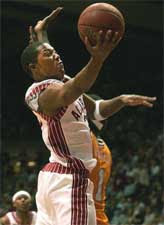 They say it's minor surgery, but to be honest I think something's up. What 'it' is I have no idea.

TUSCALOOSA -- Ronald Steele admits he will be a little nervous today.

"Nobody wants to have surgery," he said.

Steele, Alabama's senior point guard and team leader, will have arthroscopic surgery on his left knee today. Doctors James Andrews and Lyle Cain decided on the procedure after examining Steele on Tuesday night

Steele had surgery to repair cartilage in both knees in April. While recovering for the upcoming season, Steele's left knee began bothering him. The surgery has been described as minor, and Alabama coach Mark Gottfried remains "very confident he'll be ready to go when we start the season."

Steele scheduled for surgery
Posted by bobbyjack at 2:30 PM