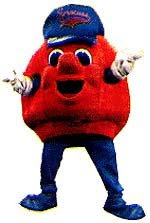 I guess they changed the name as I knew it as the pre-season NIT... which is waaay more important than the NIT.

Ohio State, which was ranked No. 1 entering the NCAA tournament and went on to lose to Florida in the title game, will be one of the four early round hosts for the NIT Season Tip-Off.

Syracuse, Washington and Texas A&M will be the other first- and second-round sites for the 16-team tournament, it was announced Thursday.

Ohio State, which has to replace freshmen Greg Oden, Mike Conley and Daequan Cook, who were all first-round NBA draft picks, will play Wisconsin-Green Bay on Nov. 12, with Columbia playing Delaware State in the other game. The second round will be Nov. 13.

The semifinals and finals will be at Madison Square Garden on Nov. 21 and 23.

The AP report on espn.com

I figured I shouldn't go a week without posting something basketball related so there.
Posted by bobbyjack at 2:23 PM

Texas A&M Corpus Christi was coached by Ronnie Arrow until he returned to South Alabama after their coach headed to Arkansas.

I remember A&M-CC having a pretty good year last season. They played Wisconsin tough in the NCAAs 1st round.

South Alabama probably did pretty good for themselves.