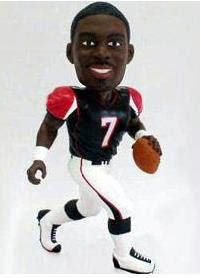 I'm sure everyone and their mothers know that Vick pleaded guilty to dogfighting charges. What some don't know is the NAACP is hoping the NFL doesn't ban Vick. I can go with that... since Leonard Little killed someone driving drunk and got back into the league. What bothers me is the excerpt below.

ATLANTA, Georgia (CNN) -- The head of the Atlanta chapter of the NAACP said Wednesday that Atlanta Falcons quarterback Michael Vick has made mistakes but that they should not cost him his football career with the NFL.

NFL star Michael Vick has accepted an offer to plead guilty to conspiracy charges in a dogfighting case.

Vick is expected to plead guilty Monday to federal conspiracy charges in an illegal dogfighting operation.

R.L. White, president of the Atlanta chapter of the National Association for the Advancement of Colored People, said his organization does not condone dogfighting or any other illegal activity, but he told reporters that Vick should be given a chance to redeem himself.

"In some instances, I believe Michael Vick has received more negative press than if he would've killed a human being," White said. "The way he is being persecuted, he wouldn't have been persecuted that much had he killed somebody."

White said he believes Vick will cut a deal rather than roll the dice on a trial and take a chance on being found guilty, but "whatever he's done wrongly, he needs to pay for it.

White also said he didn't understand the uproar over dogfighting, when hunting deer and other animals is perfectly acceptable.

The rest can be read here.

Notice the bold... maybe R.L. didn't know that Vick supposedly executed dogs by electrocution and drowning. While I don't get hunting, I've never heard of a hunter torturing a deer or rounding them up to fighting them.

I don't get these guys sometimes...
Posted by bobbyjack at 7:02 PM

i would be very VERY happy to see this rotten peice of crap get the punishment that he gave to those dogs every day.to be soaked down with a hose and shocked and beaten kicked and pissed on.he dose not deserve to play football ever again,you owe me a tv vic crap when i saw what you did on the news,i beat my tv set wishing it was YOU.being crule to animals is worse than being crule to people.i hope you get torchered slowly bitch!!