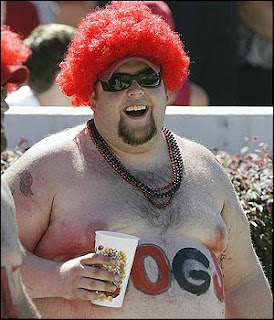 The Dawgs looked to return to the NCAAs after Harrick decimated their program, but this news might put them back to fighting with the Gamecocks for last place in the SEC East.

Athens -- A relatively new academic policy aimed at improving graduation rates for Georgia athletes has left the Bulldogs' men's basketball team reeling as it heads into one of its more promising seasons in years.

On the eve of the first practice of the season, three players were suspended for a total of at least 30 games for violating the athletics department's class-attendance and academic-appointment policy. Among them were starting guard Mike Mercer (15 games), leading scorer Takais Brown (nine games) and backup center Albert Jackson (six games).

Felton takes education seriously... might cost him his job though.
Posted by bobbyjack at 9:39 PM

I would rather lose my job that way than the Jim Harrick Jr way. Good for Felton...

Fixed the link... I got too cute with the html tag.

Felton is a complete 180 from the Harrick regime. He runs a tight ship... maybe too tight to compete, but at least if he's let go it's on his own terms.