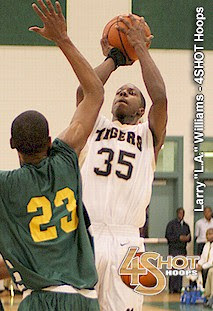 Here is the SEC signing list breakdown. Obviously, we got our guys: JaMychael Green, Tony Mitchell (shown in the photo), and Andrew Steele. Welcome aboard!

Also of note, the Aubs appear to be living and dying with JUCOs, considering they signed two, Tay Waller and Johnnie Lett. Also, remember Courtney Fortson? After a year of prep school, the former Jeff Davis standout has signed with Arkansas. Also, the alma mater of Albert Weber, the degree mill of Genesis One prep, is still in business. Arkansas signed two of their players, so it will be interesting to see if they have any admissions problems....

Also, wanna walkon to an SEC team this year???? Georgia junior guard Billy Humphrey has been indefinitely suspended following his arrest for possession of a weapon on school property. The Bulldogs previously dismissed senior forward Takais Brown for violation of team policies. Guard Mike Mercer and forward Albert Jackson, both sophomores, are serving suspensions for violation of academic policies.
Posted by Hville at 9:23 AM

I have 4 years of eligibility... although I'm not sure UGA needs a past his prime mediocre PG.

Since you are in the ATL, be on the lookout for 2 tickets to the Hawks-Celtics home game in April. I'm sure there are better means than the ebay route. Just wondering...