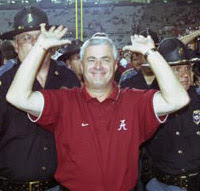 They're no Belmont that's for sure! Click here for stats.

I watched a couple of their games and to say I was impressed is an understatement. They beat an underrated Washington and demolished Ohio State to win the NIT tipoff championship. Mark Turgeon inherited a talented squad from Billy Gillispie. IMO I think he'll keep the Aggies at or near the top of the Big 12 for a long time to come.

Players to watch:
- Josh Carter is their leading scorer and has no problem chucking it from beyond the arc. He's also their best FT shooter so hopefully Gee or Riley (I assume they'll get him defensively) keeps up.
- DeAndre Jordan in the middle is going to alter some shots and clear the boards. We'll probably have to throw a Knox/Coleman combo at him.
- Dominique Kirk takes care of the ball. Check out his assist/TO ratio. I suggest getting the ball out of his hands if possible.

Side note- I'm glad fRan got canned... back to Pittsburgh State with him.
Posted by bobbyjack at 12:02 PM