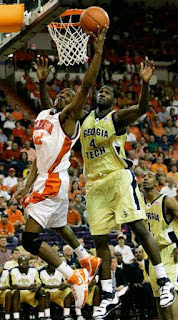 ... being that tomorrow will be spent watching football from 11AM to 11PM (with our game against Clemson fitting in) I figured it would be best to cram all this info into one post. Can you dig it?

First off, here's the Clemson stats pack you've been waiting for all week.

Clemson is 2-1 against the SEC this year with wins at Mississippi State and over NIT regulars South Carolina, and a close loss to surprising Ole Nutt... uh Miss in the Puerto Rico tournament.

Led by K.C. Rivers, Clemson is off to another fast start. Rivers is roughly 41% from beyond the arc so we got to especially watch him there. Ditto for Terrence Oglesby (43%) and Cliff Hammonds (47%). James Mays might pose Hendrix some problems inside.

Last year I believe they started 17-0 and ended up in the Not Invited Tournament so obviously they're hoping this fast start can be maintained into the ACC schedule. I think they're better this year.. not to mention their non-conference schedule last season was pretty weak.

Prediction- I'm liking what going on with the team right now. Gee is playing like we all hoped he'd be and Hendrix is a man-child inside. We're getting good perimeter play from Riley and the bench so I'll say... Alabama by 8.

1) Tennessee- they have the makings of a Final Four team with an impressive win over Gonzaga in Seattle.
2) Ole Miss- demolished the fightin' Eustachy's of Southern Miss.
3) Vanderbilt- still unbeaten.
4) Alabama- the beatdown of GW was super impressive.
5) Florida- ho hum... next test is in Tuscaloosa January 8th.
6) Auburn- well... they did beat Towson.
7) Arkansas- someone had to beat La-Monroe... ok, ok... I'm still bitter we couldn't beat LA-Monroe in football.
8) Mississippi State- good win over Missouri. Maybe they got things turned around.
9) Georgia- I had to put them somewhere.
10) LSU- tough loss to Washington at home. Not sure what to make of them as of now.
11) South Carolina- they beat the Anteaters of Cal Irvine.
12) Kentucky- you lost at home to a bad San Diego squad of the WCC. I know they won today, but man... they truly suck.

I was impressed with how well the team is playing together. The guys seem to know where everyone was on the court (at least against GW). Low turnovers, good shooting, terrific defense, and for the most part understandable substitutions is what I've been hoping for all season. We still have problems breaking the press and inbounding the ball, but considering the final score there's not a whole lot to complaim about.

Gee had been a lot more active... on the boards, diving for loose balls, and taking it to the basket. I like the PG by committee of Pickett and Torrance. I disagree with DJC in IMO I still think as of right now Torrance is our best option at the point. Still, Pickett is playing well at the point.

The best part of the game was CMG calling a TO with under 2 minutes left to let Dill, Sellers, and Cage in the game. All of them acquired stats... Cage did his Reggie Rambo impersonation with 2 fouls and 2 points, Dill with a rebound and an assist, and Sellers with 2 points (assist from Dill). Good times. The 2nd best part... no one logged 30 minutes.
Posted by bobbyjack at 4:43 PM

This was a great season.