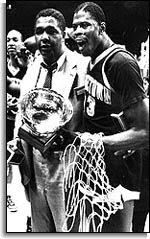 I have to admit I'm a bit more 'stoked' about this game being that I used to root against the Hoyas big time in the 80s. Anyways, stats pack for everyone.

They're currently #1 in scoring defense so if you thought SELA played good D then get ready to be wowed. Led by Roy Hibbert and Jonathan Wallace (from Harvest, AL) Georgetown has one heck of an inside/outside game. Hibbert is near the top in FG% and Wallace is 43% from beyond the arc (he's better from 3 than 2).

Other players to watch are Patrick Ewing Jr who seems to have found comfort since leaving Indiana, Jessie Sapp (2nd leading scorer and APG leader) who was injured against Fairfield, but expects to play, and DaJuan Summers... a a sophomore that led the team in scoring against Fairfield. Jeremiah Rivers (so) and Austin Freeman (fr) are the guys off the bench to watch.

Prediction: Georgetown has been sleepwalking through their first 5 games. Trouncing Michigan is their biggest win so far. Saying that, right now I don't think we're as good as Michigan so I can see this game getting away from us early if we can't stop Georgetown inside. Still, the game is in Birmingham so we got a shot. In the end it's too much size and stingy D that gets the Hoyas the win. Georgetown by 9.
Posted by bobbyjack at 1:04 PM

I agree. Georgetown by single digits seems about right.
I do disagree that Bama is not as good as Michigan though. I've had the opportunity to watch Michigan a few times this year and they're not....they're not good.

On further review you're right... Michigan is worse than us.. but not by much.