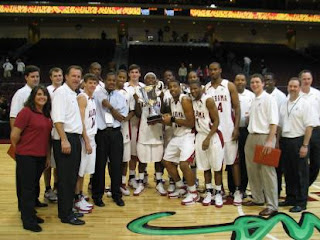 I've read Alias' recap of the Missouri State game, and I pretty much agree with everything he said. Chris Stewart is obviously doing an outstanding job of describing the action. I will say that Missouri State is not a bad team. This was a very evenly matched tournament. Missouri State gave Purdue a very competitive game as well. I don't think any of the 4 teams are top 25 caliber, but they are all solid, competitive teams.

Since Alias and Bobbyjack have already covered the Missouri State game, I won't rehash the details. Our shots weren't falling early, but we continued to scrap and Gee made some huge plays for us down the stretch. It wasn't pretty, but we showed a lot of character by getting the job done at crunch time.

We did not play all that great in the first half against Iowa State, giving up 40 points. Riley and Rico both lost their men on defense allowing the cyclones to drain some 3's, and Richard even got beat down the court in transition a time or two. The coaching staff obviously did a good job of getting the team re-focused at halftime because we came out and looked very sharp on both ends of the court. I would say the 2nd half of the Iowa State game is the best half of basketball we have played so far this season.

Riley won the MVP, and it was well deserved as he shot the ball well and played good defense in the second half, but it could have just as easily went to Richard Hendrix. Iowa State had good size, but their big men just were not strong enough to do anything with Richard. Hendrix pretty much had his way in the paint.

Alonzo Gee also deserved serious consideration for MVP honors as he played very well in the championship game and in the second half of the Missouri State game. The fact that an argument could be made for 3 different players for MVP indicates that we are starting to play well as a team.

This was the type of game I was looking for out of Rico Pickett. He's starting to give us an additional threat from the 3-point line, and more importantly, he only had one turnover.

Two key plays stick out in mind in this game. At the end of the first half, the Cyclones had taken a 2 point lead with less than 3 seconds on the clock. We ran our patented Jemison to Hendrix in the paint, turn and shoot play, which amazingly continues to work. It could have been somewhat demoralizing psychologically to go into the half behind after surrendering a lead.

The second sequence that I feel was the difference in the game came early in the second half. We had gotten lazy on defense for a couple of possession, Torrance committed a turnover, and Iowa State capitalized on all of our mistakes to make a run and cut the deficit back to 3. Coach Gottfried called timeout, made some adjustments, switched back to the zone defense, and within 3 minutes or so the lead was back to double digits.

I did not see the Iowa State-Purdue game, so I have no idea how they managed to beat them. I do believe that Alabama-Purdue would have been the best possible matchup in the tournament. Hopefully Iowa State can win some games in the Big 12 and help our RPI. Regardless, this is a win that should give us some momentum, and perhaps winning a tournament on a neutral site will pay dividends in March.

A few non-basketball related thoughts... I agree that this tournament was poorly marketed. The price of tickets was criminal as it was, but then they make you buy for both days. Not only should they have sold separate days, but they should have broken it up into sessions. I had no desire to sit there all day for 2 days and watch the likes of Texas Southern v. Bethune Cookman. It wasn't advertised at all locally. The cab driver who took me from the strip to the arena yesterday was not even aware that there was a tournament going on, and from talking to him, it was obvious that he was a big UNLV basketball fan.

That being said, the arena was very nice for its size.

I was impressed and somewhat surprised with the size of Iowa State's crowd. They probably had us outnumbered 8 to 1. It was a pleasure finally getting to meet Bobbyjack and his crew, and I'm glad to see he made it back home safely. Up next, George Washington comes to Tuscaloosa at 5 p.m. Saturday.