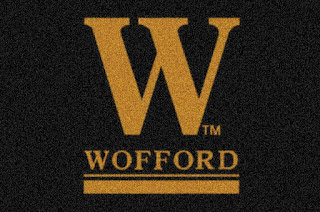 For those that just got to know.
Also, here's a Wofford men's basketball prospectus.

Wofford comes in at 4-3. They're coming off a heartbreaking loss to the mighty Elon Phoenix. Against Arkansas and Wisconsin they lost by 22 and 27 points.

Drew Gibson andd Shane Nichols are the only players averaging double digits in points. Nichols is playing his 3rd game of the season... not sure why he didn't start/play the other 5... oh well. Tyler Whatley is their leading rebounder, but Wofford does a good job overall at clearing the boards. At one point they were #1 in the country in rebound margin (now #11). They're also in the top 20 in scoring defense and FG % defense.

Ok, the stats look impressive until you look at the roadkill they compiled it against. Lees McRae, Virginia-Wise, and Toccoa Falls aren't exactly basketball hotbeds. For humor, look at the Wofford-Toccoa Falls box score. Wofford outrebounded Toccoa Falls 48-6. Is that possible?

Prediction- I believe this is a critical week for Alabama basketball. We have to win at least 3 of 4 in this stretch. Wofford just played on Saturday so I'm guessing they might not have their legs under them. The winning begins tonight in impressive fashion. Alabama by 17.

Gametime 8PM EST (7 CST). The game is on CSS and is available for the millions of ESPN Full Court subscribers... YEAY!
Posted by bobbyjack at 8:16 AM

I agree this is a critical week for Bama, but I would say they need to win all 4 four games. Texas A&M and Georgetown were not winnable games for this team in my opinion. The remaining non-conference games are winnable (yes, even the Clemson game) and I think Bama needs to win them all.

Purdue is going to be a tough game to win in Vegas. I want to win all 4, but looking at how this team has played so far my realistic expectation is the 1st 3 and a close loss to Purdue (if it's Iowa State then we should win that one as well).

I agree from Sunday on out we need to run the table to conference play.