Good 2nd half effort, but fall to Hogs in OT... 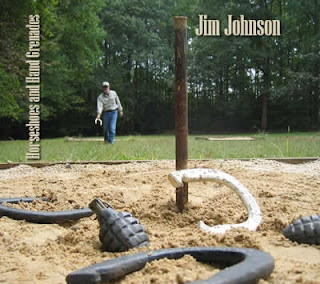 ... 71-67 in a pretty ugly game. If you looked at the box score only you'd think there was some great defense played. You'd be wrong... both teams missed more than their fair share of open shots and both of them had quite a few "scratch your head" shots.

The good:
- outrebounded a bigger team
- didn't throw in the towel down 11 late in the 1st half

The bad:
- free throw shooting sucks
- Tubbs can't throw it in the ocean
- Gee took a lot of bad shots

Overall, I like that the guys kept on motoring, but being that the Hogs played like crap I really think this game was for the taking and we missed an opportuntiy to steal one on the road. Maybe we can steal one in Athens coming up.
Posted by bobbyjack at 6:49 PM

How we managed to stay in this game, I don't know, but we blew a golden opportunity. When you shoot 50% from the line and lose in OT, you don't have to look very far to see where the game was lost. I understand that we practice free throws a lot, and actually shoot pretty good in practice, Hendrix included. I think most of the practice drills are based on running if you don't perform well. If I were CMG I would institute a new policy...for every free throw missed during a game, you will run suicides before practice the next day.

Just when I think we finally have our substitution patterns straightened out, Knox starts getting playing time over Coleman, and Hollinger moves back to run point for a good part of the 2nd half and OT. He did a good job of getting us back in the game, but I still think we are better served with him coming in at the 2 position...especially considering Tubbs can't throw it in the ocean right now, and Hillman just isn't a scoring option at this point in time either.

The substitution patterns (or lack there of) still bother me. After all this time CMG still has no idea how to rotate them in. I don't get it.

If we don't beat UGA we could be looking at a 1-5 start to the SEC schedule... which will put us hoping for a NIT berth. Despite losing Steele for the season this team should be fighting for one of the last NCAA at large spots... not trying to beat out South Carolina and UGA for the NIT.

As for FTs... I've now read/heard from different sources that Hendrix's FT shooting was altered since he arrived on campus. If true I REALLY want to know why that was.

Okay, I'll confess. I did not listen to the game. I tried to find it on television (what is Raycom Sports?) and decided not to listen to it if I couldn't watch it. Mrs. Alias and I watched "3:10 To Yuma" instead. I thought that would be a good deal less nerve racking. I did get to hear the last three minutes of regulation though. It sounded like our kids were playing well and that they were being coached well too. But if I can't see the action then I have no idea whether the hogs are just stone cold outside the arc or that Riley And Friends finally stayed in position.

BTW, I really like the hand grenades and horseshoes pic, BobbyJack. I do think, however, that it is fair to throw atom bombs into that "close counts" category.

I thought they were going to steal it Sunday. I really did. After the Florida game I told myself I would root for them but I wouldn't get all bent out of shape if they lost. Then they spring that game on me yesterday. Oh, so close.
I don't mind Gottfried playing with the rotation. My opinion was that the line-up needed to be juggled to try and improve the defensive play. I think Gottfried made a great adjustment when he put Hollinger at point. Pickett was struggling with the pressure and the environment. If Gottfried doesn't make that change, I don't think Bama would have stayed in the game. I also like that he took Riley out of the game early because he didn't feel he was playing well. After he came back in, he played much better. I wish he would have reeled in Gee though. He took some awful shots at key moments.
All in all, I thought the team put forth a good effort despite not shooting well and having to deal with a very raucous crowd. If the team could just put forth that effort every night they would win more than lose.
With a four-game home stand coming, Wednesday night is so important. Steal one on the road and win at least 3 out of 4 at home (beating Tennessee is going to be tough for all of the conference teams, I think) and I think Bama will be back in the hunt. I guess we will see Wednesday night if this team took anything positive from Sunday's game.