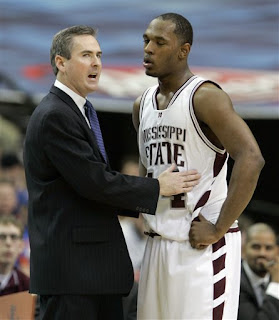 Winners of 7 straight... they've been playing some good ball the past 3 weeks. Here's your stats pack.

Jamont Gordon leads the team in scoring and has picked up his game in conference play. Charles Rhodes and Barry Stewart are also guys to watch on the offensive end. Defensively look for Jarvis Varnado to swat shots left and right (I believe he's leading the nation in BPG). Ben Hansbrough is doubtful for the game. He did not play against Kentucky due to a broken middle finger. Mississippi State is off to their best start in conference in 14 years coming in at 3-0.

Here's a press release about the game from Mississippi State.

Prediction: We got 2 teams going in opposite directions. If this were football I'd call for a blowout, but in college hoops there's always a chance. We shouldn't be this bad and I have to figure if there's any game we show up for this year it's got to be this one. Still, I think in the end State wins it late. State by 4. Man I hope I'm wrong and we beat them by 49.

Tipoff is 3PM EST (2PM CST) on Raycom Sports. It's also on the ESPN Full Court package if you bought it (and I won't make that mistake next season) and available online to watch at this link. Click on the video icon and enjoy.
Posted by bobbyjack at 8:00 AM

bobbyjack, if i had bet the opposite of all your game predictions this year i'd probably have $2000 in my account! this game is hard to call...cmg hates $tan$bury so much he might actually coach and instill some emotion in the team today

That's why I quit betting on sports. Although I've been pretty good at picking other games this year. Might start tracking it here for entertainment purposes.

Random thought- why does it seem that we're always on the wrong side of a last second made shot to end the half.