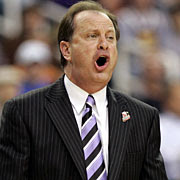 Brady's firing was first reported by several Baton Rouge media outlets on Friday morning and later confirmed by LSU spokesman Kent Lowe. Brady will be allowed to coach the Tigers on Saturday against No. 7 Tennessee before handing the reins to assistant Butch Pierre for the remainder of the season.

LSU has called a 2 p.m. ET news conference, at which time it said it would explain its decision to let Brady coach one more game.

Great minds...looks like we were posting at about the same time.

It appears the pixelated him as well.

Both of you beat me... sweet. The gauntlet has been thrown in the SEC. LSU has decided that they want to excel in hoops and football.