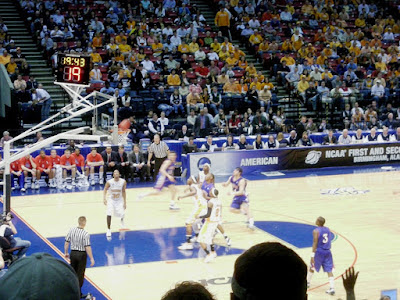 I couldn't do this again (the ball going in pic above) if I took 1000 pictures. I got lucky.

I attended the 1st session in Birmingham and saw Tennessee fight off an upstart American University and Butler destroy South Alabama.

It took 38 minutes for Tennessee to put away American. Lofton had a horrendous game but Chism, JaJuan, and Tyler Smith picked up the slack. American University represented well both on the court and in the stands as quite a few American University fans made the trip from DC. Butler absolutely killed USA. #34 for Butler made just about everything he threw up from beyond the arc. I watched him warming up before the 2nd half and he didn't miss a shot. Come to think of it, everyone from Butler was hot from beyond the arc (just checked the stats... 53% from 3). USA was clearly outclassed in this matchup. I was kinda surprised there weren't more USA fans in attendance.

The Tampa region saw all the upsets as #12 Western Kentucky beat "The Drake" in OT on a game winning 3 as time expired, #13 Siena took care of Vanderbilt easily, #13 San Diego (drove by their campus Monday... very nice BTW) beat UConn in OT on a last second jumper, and #5 Clemson chokes an 18 point lead to lose to #12 Villanova. So in the 2nd round we have 2 matchups of 12 and 13 seeds. Wow.

Miss State comes back to beat Oregon... I think they give Memphis a game Sunday. Arkansas upends Indiana and now faces UNC Sunday. The Hogs have the talent to play with UNC and will give them problems inside.
Posted by bobbyjack at 8:00 AM