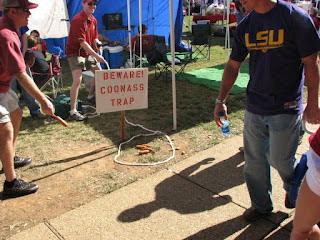 - LSU finalized the contracts of Athletic Director Alleva, Mens' BB coach Johnson and football coach Miles. Really, the only reason I posted this was to make the photo appropriate. Thanks to F.B. for that in my email.

- Johnny Dawkins is learning to fly after 11 years under the careful supervision of Coack K at Duke. Dawkins has accepted the Stanford job. Maybe he'll be more successful than previous Duke assistants as a HC. We shall see.

- Tom Izzo is rumored to be a candidate for the Chicago Bulls job. It's not the first time his name has been mentioned with a NBA opening. For the first time I think this one has legs to it. Maybe Izzo is tired of recruiting.

- Tyler Hansbrough is returning for his senior year at UNC. Ty Lawson and Wayne Ellington are testing the NBA waters, but more than likely will return. Make a wild guess who the preseason #1 is going to be.

- Jamont Gordon declares for NBA Draft, but hasn't hired an agent. On the surface it seems like he's coming back, but there's been some "chatter" that he pulled a Dontae' Jones in the classroom. No Hansbrough and no Gordon means the SEC West is wide open next year.

- John Calapari signs an extention at Memphis through the 2012-2013 season. This means nothing as he's been (allegedly) weasling his name into the Chicago Bulls coaching discussion. When a bigger fish comes calling he'll bolt out of Memphis.
Posted by bobbyjack at 3:29 PM