Straight from the hors... uh bulldog's mouth.
Read all about it.

If I were a MSU fan I'd be miffed by this. CRS has proven over the years he's a mediocre coach with a spotty record of keeping kids in his program.
Posted by bobbyjack at 6:53 PM 6 comments:

Yes I'm a week late and a dollar short... sue me. You get what you pay for (g).
Ole Miss schedule

Good for him. I really believe he'll stick in the NBA for a few years. I laugh at all that thought Hendrix made a mistake declaring early... eheh.

I'd say at least he's not in foreign land, but the SF area is not like the rest of this country. :)

... ESPN is counting down the 50 most prestigious programs and we're where I expected us to be. I found it to be a pretty good (compact) assessment of the program since 1984.

Link
Posted by bobbyjack at 1:51 PM No comments: 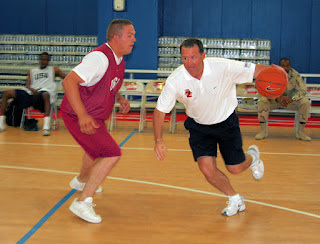 He asked Bill Ellis of bamabasketball.net and me 5 questions. We answered. Here's a link to his post. Thanks to the Capstone Report for showing some love to hoops as we get ready for potentially an exciting football season.

One correction... I should've said 'win 2' instead of 3 in the Maui Invitational. If we win 3 then we win the whole thing which would shock the world. With UNC in the field the only way we win is if their entire team comes down with the flu or food poisoning... hmmm (g).

Here's a link to the tournament site. Hopefully tickets aren't as much of a ripoff as they were for the Las vegas Classic.
Posted by bobbyjack at 8:16 AM 2 comments:

According to the Bham News. If he coaches anything like he played, with great intensity on both ends of the court, this will prove to be an oustanding move. I think he can provide us with some leadership that we have been missing the last two seasons.

Also, our thoughts and prayers go out to Kobe Baker's family. I know he wasn't a popular hire, but he's a better coach than most gave him credit for, and you have to respect him for having his priorities straight and taking care of his father. Best wishes to them.
Posted by DJC at 9:42 PM 3 comments:

MLB Predictions
AL East- Tampa Bay... despite the losing streak into the All-Star Break, I really like the makeup of this team. If they can add one more middle tier SP I think they win the division.

AL Central- White Sox... even though the Twins and Tigers are breathing down their necks, they should win due to their superior rotation.

AL West- Angels... with the A's loading up on prospects and the Rangers a year away, it's almost a given the Angels wrap this up in early September.

NL East- Mets... firing Willie Randolph might be the best move they make this year. The team seems more relaxed and are playing to their potential. The Phillies are loaded, but the rotation is still shaky. The Braves... well, let's just say I see Tex being shopped in the next couple of days.

NL Central- Cubs... a ridiculous rotation with a super potent lineup equals another division banner. The Brewers might make them sweat for a while, but the Cubs have too much talent.

NL West- Dodgers... in a terrible division Torre manages to lead this band of has beens and great young talent to the playoffs with a barely over .500 record. Most thought this would be the most competitive division in MLB, but that's not the case.

Wildcards- my heart says Yankees, but my brain says Red Sox. Either way they won't survive the 1st round. In the NL I see the Brewers making the playoffs for the 1st time since 1982.

In the end I see the Cubs and White Sox in the WS with the southsiders winning in 6.

Music
- My music taste for the most part is hard rock/metal, but I've grown to like 3 Doors Down. Link to their recent single.
- Shinedown: one of the few "new" bands I dig. Link

Random
- Why is a 20oz bottle of soda more than a 2 liter?
- I don't understand the bottled water craze... it's just tap water through another filter (sometimes). Convenience is the only thing I can think of.
- Who thought ethanol is a viable alternative to gas? I see it more as a stop gap.
- Budwiser is about to be run by a foreign company. Is it really as big of a deal as the media is making it to be? Seriously, the beer is going to taste the same.

These are the things I think about when stuck in Nebraska for 2 weeks.
Posted by bobbyjack at 2:18 PM 4 comments:

WOW... is this a dream? All we need now is ESPN to pull the plug on Vitale to make this perfect.

Clark Kellogg to replace Packer in the booth.
Posted by bobbyjack at 12:40 PM No comments:

It's from Andy Katz' ESPN blog (which is subscriber only) so I can't cut and paste it, but the gist of it is have all Division I players available for the draft and give the kids 10 days to return to school if they don't like where they went in the draft.

I never thought of that and it's a great idea. It puts the power back in the NCAA's hands. A radical idea that actually makes sense. The problem I see is unlike baseball, the NBA only has 2 rounds, but that's their problem not the NCAA.
Posted by bobbyjack at 8:50 AM 1 comment: 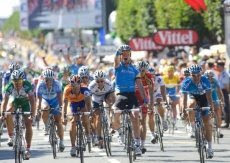 Garmin Chipotle (formerly Slipstream) and Team Columbia (formerly Team High Road) are leading the overall team classifications at this year's Tour de France. Their status so early in the race is not nearly so surprising as was Alberto Contador's having won the Giro de Italia, but it is quite a feat. Both teams are loaded with time trial specialists who might not fare very well when the mountain stages start tomorrow, but they do deserve some recognition for their accomplishments. Garmin's Mark Cavendish won today's sprint, Columbia's Kim Kirchen holds second place in the General (overall) classification, and Columbia's Thomas Lövkvist is wearing the Best Young Rider's jersey.

Even people who are not cycling fans can enjoy le Tour in the USA on The Versus Channel. Why not watch a few stages? You might learn to really enjoy it.
Posted by Alias at 5:43 PM No comments:

Nostaglia, does it affect the way we judge sports today?

I write this on the heels of watching quite possibly the greatest Wimbeldon men's final ever between Rafael Nadal and Roger Federer. I have long said that tennis was better in the mid 80s with McEnroe, Connors, Becker, Edberg, Lendl, and others battling for the majors, but watching Nadal and Federer play has made me rethink this. I could discuss this great match further, but I wouldn't do it justice... as I'm just a casual tennis fan. I'm sure there are blogs out there that can dissect it better.

Anyways, I thought about all the times I've said that (name the sport) was better back then than it is now, but is that true? Today's athletes are in better condition and have access to better technology and medicine so it can't be true. Can it?

My belief is this... today's athletes compensate fundamental flaws by their athleticism. I'll use basketball as an example.

The argument today is kids can't hit the mid range jumper or free throws like those in the past. For the most part this is true, but yesterday's athletes couldn't get to the basket like today's kids do or had the 3 point range. Then again there wasn't always a 3 point line so who knows if the last part is true. The game today is fast paced, but more one on one oriented unlike the past where it was more half court.

I guess the point of this post is instead of wishing the game you watch was played the same way it was years ago, appreciate the improvements and mildly bitch about the loss of fundamentals. I know that's what I'm doing to do going forward.
Posted by bobbyjack at 9:31 PM 1 comment:

MLB- Joe Buck is annoying... and more are beginning to understand this

Great commentary here. Anyone that's watched MLB over the years will agree that Joe Buck is quite possibly the worst national commentator the past 20 years on the air. If I was a kid watching baseball for the first time and had to sit through a FOX game he's calling I'd probably play soccer too.

Let me start by saying I don't like Joe Buck. In fact, I've never liked Joe Buck. When I watch Saturday afternoon baseball or the playoffs on Fox, it takes everything in my power to stop from hitting the mute button. He doesn't add anything to my enjoyment of the game and, more often than not, his refusal to never shut up and let the game breathe a little bit makes for the equivalent of a drill-bit being bored into my head for more than three hours at a clip.

You can disagree with me if you want, but I believe that if it weren't for who his father was, Joe Buck and his droning, monotone, haughty and easily-outraged-by-Randy Moss style would be somewhere in rural Minnesota, announcing the details of that day's ice fishing contest.

Well, if there were any broadcasting justice and any chance to make my dream come true, rural Minnesota is where Joe Buck would end up after the comments he made on this morning's Colin Cowherd Show. Apparently not only does Joe Buck not enjoy baseball as much as he used to, he says would rather watch "The Bachelorette" instead of the game that, for some reason, has made him its preeminent voice.

In the age of unbiased commentators, I find most to be bland and boring. If I'm watching the local broadcast I WANT the announcers to be homers for the team. Give me Phil Rizzuto (RIP) and Bill White over any of the ham and eggers employed today. Even though Haray Carey was lit most of the time in the booth he was still more entertaining than 99% of the guys today.
Posted by bobbyjack at 8:36 PM 1 comment: