Election day update... on former SEC players in the NBA 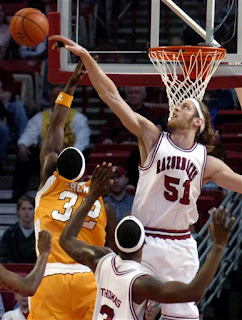 I'm limiting this to guys that left college last season not drafted in the 1st round.

1) Richard Hendrix- looks like he made the Golden State roster. I'm not sure how he's going to fit in with them running up and down the court, but hey... he's got $442K for the year. I assume that's his for the year. Congrats.

2) Steven Hill (Arkansas)- was one of the final cuts in Portland. I went to their 1st exhibition game at the Rose Garden and saw his ugly mug on the bench. I was shocked. He's probably one of my favorite non-Alabama players the past 5 years.

3) Sonny Weems (Arkansas)- on the Denver Nuggets roster. I never thought he was all that good, but obviously someone thought different. Like Hendrix he gets to keep $442K.

4) Shan Foster (Vanderbilt)- Drafted by the Mavericks... ended up in the Italian League.

5) Joe Crawford (Kentucky)- Drafted by the Lakers... not sure where he is now since he was waived on Oct 22nd.

6) Walter Sharpe (UAB)- I had to add him in here even though he sort of finished up at UAB. He's part of the Detroit Pistons making the league minimum (like Hendrix and Weems).
Posted by bobbyjack at 4:15 PM