I'm going to go chronological from landing in Honolulu to flying out:

Honolulu- it is Detroit with a beach. I spent one day there and while I enjoyed Wakiki Beach, most of it was too commercial. 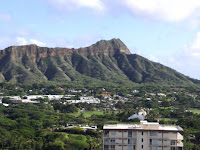 Taken from the 24th floor of the Marriott Wakiki Beach hotel.

Kona/the Big Island: my favorite part fo the trip. It was peaceful, not commercial and relaxing. We did the volcano tour, saw the lava flow to the ocean, and then circled the island. 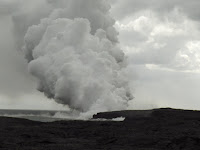 That's as close as we can get to the lava flow.

Maui: North Kaanapali is too touristy for me, but we still had fun. The tournament was more of an afterthought to tell you the truth. BTW- if you have just a tint of a fear of flying I don't suggest you fly one of the local airlines between islands. You can get great photos, but the flight is bumpy to say the least. 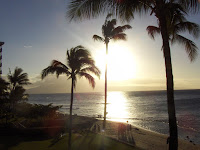 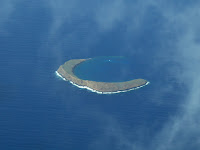 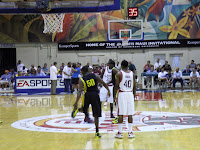 The Maui Invitational is a nice tournament that gets its recognition by its location. IMO they should play the tournament at U of Hawai'i inside of a real gym. The Lahaina Civic Center reminded me of my HS gym... with 4 goals rolled up and all. It's outdated and while I'm all for history and tradition, it's not the best place to play basketball.
If you never been to Hawaii I suggest you do so if you can. I wish I could've stayed.
Posted by bobbyjack at 7:04 PM

is honolulu that bad?

Detroit is a lot better now than it used to be... and it still sucks. That's my opinion of Honolulu. Once you get away from Honolulu, the rest of Oahu is for the most part paradise.