If we strike out on big name coaches we should consider... 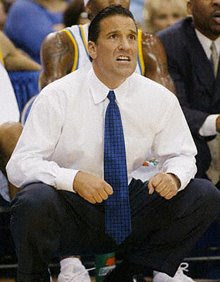 Steve Lavin. Yes, I am prepared to take a lot of heat for even mentioning him as someone we should consider, but looking at his resume I see him on equal footing with some of the other names being thrown around. Add to that he was the coach at UCLA and IMO it separates him from the rest of the B list guys being thrown around.

He never won the PAC-10 in his 7 years there and UCLA fans make the argument that they underachieved (and they're right to a point) under Lavin, but for Alabama five Sweet Sixteens in 7 years is much better than 1 in the last 17 years.

Lavin is still young (44) and he learned a lot from being the UCLA HC. People have to remember that Lavin was thrusted into the position when Harrick was fired. Looking back, I think he did a decent job, but decent is not enough for UCLA. They want championships and Lavin at that time probably wasn't ready for that level of scrutiny. When he was fired, I believe he thanked UCLA for the opportunity and left with class and dignity.

i'd have no problem with that choice for the reasons listed.

as a espn commentator, he also has street cred with recruits. they've seen him on tv, know who he is.

And his wife is smoking hot.

"In April 2006, Lavin strongly considered a return to the coaching ranks when presented with the opportunity to become the head basketball coach of the North Carolina State University Wolfpack. Lavin instead chose to continue his broadcasting career and signed a new six year contract with ABC and ESPN that will keep him with the network through 2012.

or he's holding out for the big kahuna.

if you've been the h n i c at pauley, it might play on your ego just a bit.

we all can't be gene bartow, after all.

NCSt is the 4th best job in NC. Look who ended up with it... and will probably be fahred next season.

I'd rather have him than Haith that's for sure.

i guess you'd have to get in the mind of lavin to get his answer on whether nc st. and alabama are on the same level as b'ball programs go.

my opinion: i think their a lot closer than any one of us want to admit in the eyes of basketball intelligensia.

what do you think the chances are that mal, hart and newton (and i believe that's the "search committee")have decided they're going to hire a black coach, regardless of who it is?