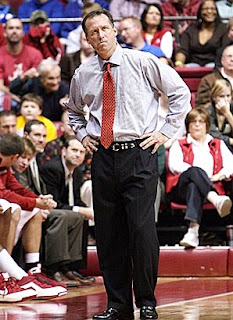 Where's xCMG
TUSCALOOSA -- Mark Gottfried has lined up another coaching gig, and will be back on the sidelines directing young players before the end of the month.

He'll just need security clearance to do it.

Alabama's former basketball coach is preparing for his third trip to the Middle East as a part of Operation Hardwood. From Aug. 17-25, Gottfried and other college coaches will visit U.S. military bases around Baghdad and possibly other areas in the region. While there, they will direct groups of soldiers in an eight-team basketball tournament.

"It's real competitive," Gottfried said with a laugh. "You'd think the coaches are all coaching at the Final Four. And the players, these young soldiers, they're getting ready. They're representing their base. We have different bases, and they select a group of players to represent their base."

Gottfried previously made two trips to Kuwait during his tenure with the Crimson Tide, which ended in late January, when he was asked to resign before the end of his 11th season.

Things have slowed down for Gottfried since then. In many ways, he's home again, courtesy of the family's move to Orange Beach.

You know, I think he'll be a pretty good analysis for ESPN. He has better credentials than most of them (minus Lavin and Bilas).

LSU in NIT Tip off
They open with Larry Bird's alma mater.

The pairings were announced today by C. M. Newton, the chair of the NIT Selection Committee.

The Center will be the site for the South region of games with the third seed in the 16-team event. The other game that will take place in Baton Rouge involves Western Kentucky, who was second in the 1986 NIT Season Tip-Off from the Sun Belt Conference, against Milwaukee (formerly Wisconsin-Milwaukee) of the Horizon League. Western Kentucky is the fifth seed in the tournament.

The times and any possible television has yet to be announced.

I think LSU is going to struggle this year.
Posted by bobbyjack at 11:06 AM

I think XCMG will make a very good announcer. Unlike with most former UA coaches, I think I would be pleased to have him doing our games.

I think so too. Good luck to him.

Gottfried's affable personality should work well in television. I'll take him over Lavin any day; Lavin annoys the hell out of me.

I too expect LSU to struggle this year. Trent Johnson is a great coach, but he lost a lot from last year. Tasmin Mitchell is capable of putting up 20 a night, but after that it's a crapshoot.

I like Lavin... heck I wanted him to be our HC.
ESPN needs to hire Jim Harrick so they can have the all the components of the 1994 UCLA coaching staff.

espn would have to hire a platoon of beanies to watch the expense accounts.