As I was walking out of the arena, a Kentucky fan approached me and said, "We should have lost that game. You guys outplayed us, outhustled us, and out coached us. The only reason we won is because we outtalented you." That's pretty much dead on, although I'm not sure if "outtalented" is an actual word. Kentucky is a legit top 5 team, they may have the top 2 picks in the NBA draft, it is a special level of athleticism and depth on that roster that does not come along very often.

Despite being outmanned, our guys played very hard. I liked the game plan. We attacked the basket early and often. It would be tempting to just throw up a bunch of 3's against a team like Kentucky and hope for the best, but by going right at them it sent a message to our team that we have confidence in them. It also sent a message to Kentucky that we were not going to be intimidated by them. We played about as well defensively as could be hoped for. We did a good job of slowing down the pace of the game and switching defenses, although I thought we pressed a little too often. UK is just too athletic to hope to have a lot of success against in a full court press.

The officiating was inconsistent at best. I felt they missed several obvious fouls in the post and we got called on a number of plays with minimal contact. It definitely had the feel of an away game, with UK having close to 85% of the fans, as you can see in the pic below that I took 9 minutes before tipoff.

Once Chris Hines fouled up, we had little chance of slowing down Wall. Despite the foul trouble, our post players played very well. It was good to see Jamychal Green bounce back and have a nice game, although he did miss some badly needed free throws. Torrance showed great leadership today and made the plays in the second half to keep us in the game.

UK made a lot of unforced turnovers in the first half and we were able to take advantage and stretch the lead to 11. Even when we took the 11 point lead in the first half, everybody knew Kentucky would take the lead at some point. The question is how would we handle it. We were able to withstand a couple of runs before they finally built a 10 point lead in the second half, but we answered with a run of our own and had a chance with only a 3 point defecit in the last 2 minutes. If we only made a few more free throws and some of those easy shots we missed around the basket, who knows?

A few other miscellaneous thoughts:

-Kentucky may have the best fans in the nation. You have to admire the way they pack out an arena and travel to support their team. Also, they are first class. We had a row of UA fans amongst the sea of blue, and numerous Cats fans wished us luck before and after the game, and were generally very complimentary of our team and Coach Grant. I am genuinely pulling for them to win it all.

-Contrast that with mi$$ $tate fans who had a fair contingent there for today's game. I had the misfortunate of standing next to a couple of them while waiting in line to get into the arena. We were surrounded by UK fans, and one of the $tate fans asks me, in an obnoxiously loud manner so all the UK people could hear: "What do you call a well dressed Kentucky fan"...."An anomally" and then yucked as if was the most hilarious joke ever. I just shrugged and said, "Please don't throw anything at their players, I don't want the media assuming the debris came from Bama fans." To which, the $tate fan responds, "we only did that ONE time, and we weren't throwing stuff at their players, we were throwing stuff at the referees!" I said sarcastically, "oh yeah, that makes it so much better." Being dead serious and somewhat irritated, the $tate fan answers, "Yes it does! It really does! Those refs sucked!" Now, you are probably assuming this was some young punk right? Nope, 60 year old lady (and I'm being very generous with my choice of the word "lady"). The comment about the UK fans' attire was even more laughable a few moments later when I overheard a $tate fan say, "I wish we would wear those camouflage jerseys like South Carolina did that time, that was sweet." I'm sure there is a $tate fan out there somewhere who is a decent human being, but I have yet to encounter one.

-Major Thanks to the kind Alabama fans who gave me a great lower level seat (again, see pics) for only 80 bucks when everyone else was asking $300-$400, and actually getting AT LEAST $250. That was very cool, and I enjoyed watching the game with you guys.

-Nashville is 100 times better of a venue for this tournament than Atlanta. There's really not a bad seat in the house, and there is a lot to do right outside the arena. My friend and I had a great time partying with all the Kentucky fans and listening to bands until 2 am or so Friday night. The only drawback is the size won't really accomodate a strong Kentucky and Tennessee in the same session.

-I don't think I saw a single Vandy fan anywhere the entire time I was there. Which surprised me since they are pretty good and it's in their town. Of course, Tennessee was very well represented.

This was my view for the South Carolina game from the club level: 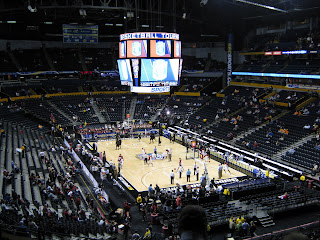 Here was the view from my seat for the Kentucky game: 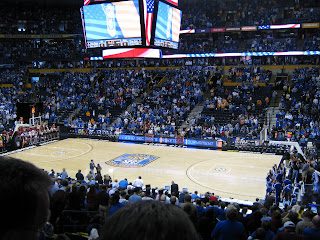 Up next, we anxiously await the NIT selection show. Sadly, I do not think we are in. Too many conference champions have lost in their respective tournaments thus getting automatic bids. I hope we would accept a CBI bid, but I doubt if we will. This season is probably over. It was disappointing and even heartbreaking at times, but we improved. We played hard every night and was competitive in every game. Our worst loss was only 13 points to K-State. The future is bright. Now, Coach Grant..GO RECRUIT!
Posted by DJC at 9:14 PM

the missed free throws and lay-ups were devastating. i knew when green missed the front end of that one-and-one right before the half then uk nails the three, we were likely going to lose.

(really, thought we would likely lose before the tip off)

talent level is no doubt an issue. but depth killed us in this game too. calipari came out in the second half charging the basket and daring us to defend. we couldn't absorb the fouls, legitimate or not.

at our best times in basketball, we've never been deep enough to compete with the big boys.

i'm encouraged that grant got this team to peak at the right time. college basketball is about what you do in march. i like his honesty in public statements concerning his team and situation.

i also have a sense that grant's a work in progress, not quite ready for prime time. i don't doubt grant's coaching intelligence. but coaching basketball at alabama is about more than x's and o's.

yes, grant has a job on his hands developing 'bama basketball. but i think there's a little work to be done on the man in the mirror too.

Thanks for the report. I have been very busy at work and did not get to see or hear the game. I thought to turn on a live ticker when there were about seven minuts or so left in the game.