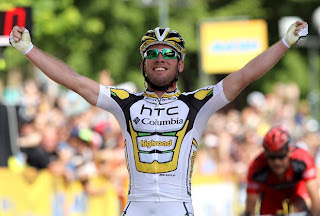 I was not able to watch today's first mountain stage in the Giro so I had to settle for the Versus Channel's coverage of the first stage of the Amgen Tour of California.  Mark Cavendish, the British rider from the Isle of Man who rides for the American team HTC-Columbia, was able to stay ahead of Saxo Bank's JJ Haedo to win this stage that obviously was designed for the sprinters.  I sure enjoyed watching Cav win, but I was disappointed that Haedo was almost able to overtake in in the last 50 meters or so.  This might be a very exciting Tour of California.  Levi Leipheimer has won the last three in a row, but he's always trained specifically for this race and planned to be ready to ride in February when it's been run in the past.  Now that they are riding in May, it would be very difficult for anyone to bet against Saxo Bank's Fabian Cancellera, the Swiss National Champion and two time world time trial champion, to win a race that traditionally has been decided in the Race of Truth stage each year.

Anyone who might wonder why another person might watch a bicycle race on television might try watching the last few minutes of the Versus coverage of this race during the coming week.  If that helps you develop a taste for the sport, then there will be lots more to offer in the coming months.
Posted by Alias at 10:49 PM